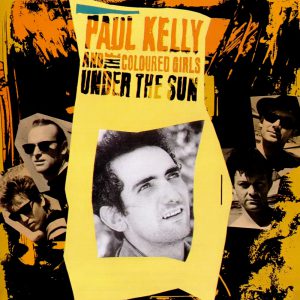 Of course, there’s never going to be a point in my life where I’m not instantly attracted to a song that features an organ chiming over a 12-string guitar, and the thin wild mercury sound of “Desdemona” — that organ was joined by a piano — was a pretty rare thing in the late 1980s.

Even better was the gloriously melodic chorus:

In the end, guitarist Steve Connolly ratchets up some noisy guitar while a Kelly and a heavenly host sing

And it’s all just ridiculously pretty, with just enough feedbacky guitar to keep it from being too pretty.

After Under The Sun, Kelly followed it up with 1989’s Scott Litt produced So Much Water, So Close to Home and 1991’s Comedy, neither of which were as great as what had proceeded them, though “Cities of Texas” from the former and “From Little Things Big Things Grow” from the latter are absolutely worth seeking out.

After that, Kelly embarked on a solo career — he put an album out just a few months ago — the vast majority of which has been off of my radar, though I’ll betcha that there are good songs on every single one of them.