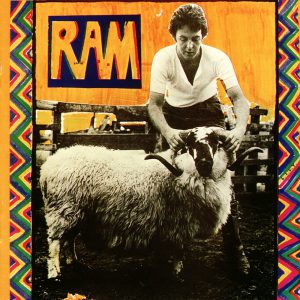 That said, the opening “Uncle Albert” section is crazy gorgeous: drenched in strings and harmonies while Paul & Linda apologize for being stoned and lazy over and over and over, McCartney even imitating a phone ringing just before the subsequent conversation.

That phone call section is actually where “Uncle Albert / Admiral Halsey” starts getting weird: by this time, they’ve already spent two verses apologizing to him, and then they call? Or are they always apologizing to him? Or am I the one who’s crazy trying to make any kind of sense of this?

Of course, in 1971, everybody — Paul included — was still reeling from the break-up of the Beatles, so a single that was was multi-part and yet still catchy as hell was a reminder that Paul McCartney still had these kind of ideas in the same way that a single that was multi-part, catchy as hell and also kinda annoying was a reminder that Paul McCartney needed people to help shape those ideas.

And so the song drifts from bit to bit, and now suddenly adding a flugelhorn and pounding piano while people randomly shouted “hands across the water / hands across the sky” and then,

HOLY SHIT, I’VE BEEN MISHEARING A LYRIC MY WHOLE LIFE

So, in between all of the “hands across the water” choruses, there’s a verse that starts:

But my whole life — right up until I checked on various lyrics sites two minutes ago — I thought that couplet was:

And sure, while the actual lyric makes more sense, what I’ve always heard was way more fun, and I’m totally and utterly gobsmacked to find out I’ve been wrong since 1971. I’m not sure I can go on. This is why I should never do research.

Luckily, the song is right there with me, as spends its last couple of minutes alternating between the “hands across the water” chorus with some silliness about gypsies, but at this point even Paul is ready for “Uncle Albert / Admiral Halsey” to end, so that’s what they do.

No doubt because everybody enjoyed the mental image of Admiral Halsey getting buzzed before he went to sleep, “Uncle Albert / Admiral Halsey” was Paul’s first American #1 as a solo artist: the beginning of over a decade of Top 10 singles for Macca, some of which will even be written about in this space.