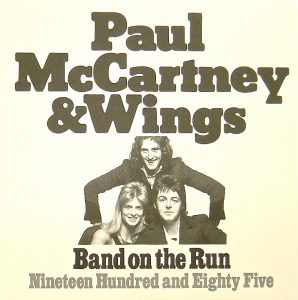 Which isn’t to say that I still don’t love the shit out of it, and I find interesting how much my love of “Band on the Run” predicted my future interactions with music. For example: in 1974, I was finishing up 6th grade at a school in a new district where all of the kids in my class had gone to elementary school with each other for six years, and being shy and weird, it was hard for me to integrate.

Except that I could talk to people about music, discussing the popular songs of the day — easy to do during the height of the monoculture — because, then, as now, I had ideas and opinions about songs. You might have noticed this. And there were very few songs more popular in 1974 than “Band on the Run,” to the point where I even got a couple other kids to sing over it with me into a tape recorder. That tape is long gone, but the concept of music as a way to create community — even temporary, false community — has been with me ever since. And I blame “Band on the Run.”

Stuck inside these four walls
Sent inside forever
Never seeing no one
Nice again
Like you, mama
You, mama
You

“Band on the Run” starts off with a deceptively simple guitar hook, off of which spins a twirling synth lick, a burbling bass and McCartney playing his ride cymbal and cross sticking his snare. It’s mellow and kinda sad, helping to set up the mood where his band is … locked up for some reason? Maybe for releasing “My Love” as a single?

This opening section lasts for only a minute or so before going into a funk — or “funk” really — interlude, with jaggedy guitar leads from Denny Laine (unless it’s Paul) and some swirling synth from Linda (unless its Paul). So, let’s talk about Linda McCartney for a second.

Linda has, of course, been slagged for decades, and the infamous tape of only Linda has been out there as “proof” of her non-musicianship, but I kinda love her simple synth parts — a little bit of grounding for Paul, who clearly didn’t care about her musicianship — and perhaps a more accomplished keyboard player would have overplayed just to impress Paul, and instead of being cool little hooks, the synth might have taken over the songs.

Oh, and quite naturally for one of my all-time favorite songs, there are handclaps! Placed at oddly disconcerting intervals, perhaps, but handclaps nevertheless.

Apparently, the lyrics to this section were based upon a comment that George Harrison made to Paul during the seemingly interminable business meetings following the Beatles break-up. Which is cool and all, but, honestly, especially back then, the first two sections are prelude. Because it’s the last few minutes of “Band on the Run” that I well and truly love more than just about anything I’ve ever heard.

If “Band on the Run” is an A+, it’s because the final folk-rock section is a A+++. Like the guitar solo of “Marquee Moon” or the “forever” part of “Ceremony” or the chaos before the final synth break of “Won’t Get Fooled Again” or “How do you say I’m lonely to an answering machine?”

And probably even McCartney knew what he had: there’s a huge orchestral fanfare that introduces it, and you can be excused at first if you thought we were heading into one of those “Live and Let Die” deals that’s all about how fucking big a song can be, but it’s really more of a transition, maybe the sound of the band breaking out the prison they were in, because almost instantly, it drops into just an acoustic guitar, big thick bass and drums. I absolutely love how it falls out of the orchestral buildup like a sudden summer rain.

Well, the rain exploded with a mighty crash
As we fell into the sun
And the first one said to the second one there
“I hope you’re having fun”

McCartney’s voice is double-tracked here off and on, and has shitloads of reverb on it, as well, especially, as they glide into the chorus, having proved that the jail hasn’t been built which can contain Paul McCartney & Wings.

Here’s the thing: this sounds like so much fun! Being the band on the run, one step of your pursuers, knowing that the jailer man and — his deputy, I guess? — Sailor Sam were probably going door to door looking for you in total frustration.

::KNOCKS ON DOOR:: “Hey, are you hiding Paul McCartney & The Wings? Sailor Sam wants to know!!”

There’s also some cool stop-time in that chorus and McCartney does a neat thing on the drums during the back half where every other measure he alternates hitting his snare and one of his toms a couple of times. And speaking of this song’s influence on me in the future: I’ve stole that beat more than once, because I love how it fucks with the momentum of a song.

Well, the undertaker drew a heavy sigh
Seeing no one else had come
And a bell was ringing in the Village Square
For the rabbits on the run

This is where the electric guitar starts making an appearance in a big way. First there’s a spooky slide lick after Paul sings about them avoiding the undertaker, and after the next chorus, the song almost stops for a second so that the guitars can echo and bounce between speakers for a second. It’s not really a solo or anything, but it does add even more texture and flavor to a song that is already overflowing with both. Also, the way Paul emphasizes the word “rabbits,” so you don’t confuse them with the band on the run. Though exactly what the rabbits are running from we never find out.

Well, the night was falling
As the desert world
Began to settle down
In the town they’re searching for us everywhere
But we never will be found


By this time, of course, the electric guitars have fully come in, and are echoing every which way, proclaiming the freedom of our heroes. Or something. I’m sure that one of the reasons I was so attracted to this song is that it had kind of a happy ending: the band running forever more, even as Paul adds one more enemy to the posse that was out to find them: the person who sentenced them in the first place.

By the way, if they’re in a County jail, no wonder they were able to break out using just an orchestral fanfare.

And then, it just ends. The band running on seemingly forever. Maybe even until the impossibly distant year of 1985; maybe they end up hiding on a farm somewhere; or maybe they go to Venus and Mars.

Of course, I wasn’t the only person who loved this deeply silly piece of myth-making: “Band on the Run” was a #1 hit single here in the U.S. — where we just eat up outlaw mythology — and even won a Grammy. In the intervening years, it’s been continually feted as one of McCartney’s best solo songs, if not just one of his best songs. And it kinda changed my life, too.

“Band on the Run”


“Band on the Run” performed live at Glastonbury, 2004