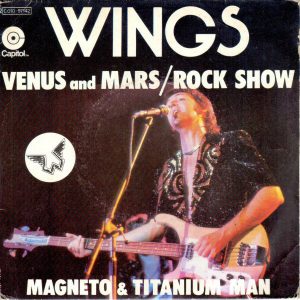 Sitting in the stand of the sports arena
Waiting for the show to begin
Red lights, green lights, strawberry wine
A good friend of mine, follow the stars
Venus and Mars
Are alright tonight

And while one might wonder how his good friend can see Venus and Mars when they’re inside a sports arena — good weed dude! — that’s the kind of quibble that instantly gets ignored when “Rock Show” proper starts, riding in on a slide guitar and a boogie woogie riff, while Paul’s having fun name-checking his peers.

What’s that man movin’ cross the stage?
It looks a lot like the one used by Jimmy Page
Its like a relic from a different age
Could be
Oo-Ee

And naturally, there are several parts to “Rock Show,” the first deviation being a bell-driven interlude where he’s right there in the front row with you. I mean, if you ever got into the front row.

The lights go down – they’re back in town O.K
Behind the stacks you glimpse an axe
The tension mounts you score an ounce, ole!
Temperatures rise
As you see the white of their eyes

But it’s the second interlude that gives away the game for “Rock Show,” as the drums switch up and the rest of the band shouts “oy!” at regular intervals, and Paul jumps into a different character while the slide guitar and piano rain all around him.

In my green metal suit
I’m preparing to shoot up the City
And the ring at the end of my nose
Makes me look rather pretty
Its a pity there’s nobody here to witness the end
Save for my dear old friend and confidante
Madamoiselle Kitty
(Kitty!)
Kitty!
Kitteah!!!

And then you suddenly realize: holy shit, this is Paul’s piss-take on / homage to glam rock! If you came across this part of “Rock Show” on the radio without knowing who it was, you might think you’d stumbled across a new Bowie or Mott track, or maybe somebody totally new.

Of course that’s somewhat dispelled by the chorus, which is pure McCartney in its combination of joy, melody and meta references.

If there’s a rock show!!
At the Concertgebouw
They’ve got long hair!
At the Madison Square
You’ve got rock and roll!
At the Hollywood Bowl
We’ll be there
Oooh yeah!

While I didn’t exactly know what the “Concertgebouw” was — it’s a real place — I love the yelled endings of “rock show!,” “long hair!” and “rock and roll!” throughout that chorus. And I probably wasn’t the only one, as the after the final verses, Paul and the rest of the band randomly scream those words over and over again with the slide screaming until finally the song collapses on one last “rock and roll!”

But of course, there’s a piano-driven coda, where Paul encourages everybody to go down to the rock show while Linda wails a synth in the background. It’s totally and completely unnecessary, but it also kinda works.

“Venus and Mars/Rock Show” was maybe the weirdest choice for a single, and it “only” made it to number 12, but I loved it more than the other singles of the period — your “Let ‘Em In” and “Listen to What The Man Said” and “Silly Love Songs” — all of which were just too yacht rocky for me.