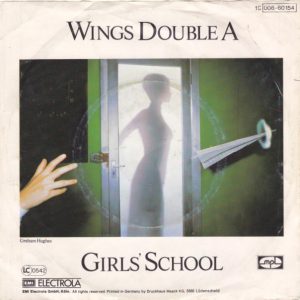 Featuring a shitton of lead guitar from Jimmy McCullough — perhaps his last recording with them before he left to join the reconstituted Small Faces — “Girls’ School” is all forward momentum and slightly problematic lyrics that is also too much damn fun to take seriously.

I love the downshifting that drummer Joe English lays on just before each chorus. At first its like he forgot to hit the snare, but then you realize that they think they’ve gotta do something to set up the chorus, even though they coulda just powered right through to it.

It’s the all-hands-on-deck “ahhhhhhhhhh” that kill me on this song every time. But I musta been the only one, as “Girls’ School” stalled out at #33 here in the U.S., and almost instantly went into total and utter obscurity, even more than “Junior’s Farm.” Since its original release in 1977, the only place you can find it is the 1993 CD re-release of London Town — it hasn’t shown up on any compilations.

For me, “Girls School” was kind of the last gasp for me with Paul McCartney for quite some time: none of the songs from either London Town or Back to The Egg connected with me — not even “Getting Closer,” — and after Wings broke up for good, and he started doing crap like “Coming Up” and those duets with Stevie Wonder and Michael Jackson, I just checked out for a very long time.