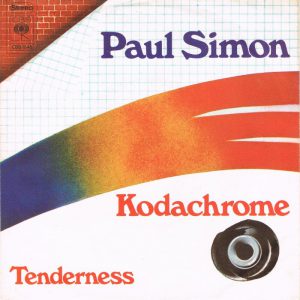 And, crap, my love for this song might be because KYNO played “Kodachrome” constantly during the summer of 1973, and every single time, I thought it was kinda cool that I could hear the word “crap” coming from the radio. Hey, I was 10, and while my parents used much more colorful language in front of me on a regular enough basis that I could honestly answer any “where did you learn that language from?” question with an honest “you,” I still had developed enough discipline to not curse in front of them. Except that one time when I said “shit!” in front of my dad when we lost the 1974 Redwood City Tournament of Champions on penalty kicks.

And while that discipline was (and probably still is) pretty standard among pre-teens, it also came in handy when I was on KSFR, as anybody who knows me has probably observed that I curse like a fucking sailor.

Anyways, “Kodachrome” was recorded with the Muscle Shoals Rhythm Section and each member adds his stamp to the song — bassist David Hood and drummer Roger Hawkins adding drive to the song, guitarists Pete Carr & Jimmy Johnson adding little licks and riffs, and keyboardist Barry Beckett overdubbing all manner of keyboards. The result is a song that has more drive than I normally associate with Simon while still allowing the singalong melody of the chorus shine through.

Kodachrome
They give us those nice bright colors
They give us the greens of summers
Makes you think all the world’s a sunny day, Oh yeah
I got a Nikon camera
I love to take a photograph
So mama don’t take my Kodachrome away

They also just kill it at the ending, as Simon, having more fun that you’d associate with him starts begging “Mama, don’t take my Kodachrome away” over and over again, and suddenly the whole band goes into overdrive, not quite a rave-up, mind you, but more of a rave-up than you’d expect from a Paul Simon single, which has always been good enough for me.