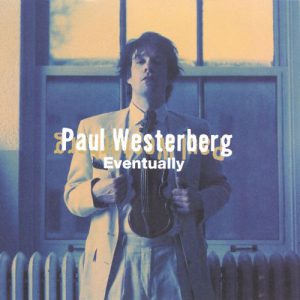 It’s not like I disliked it, of course — Westerberg still knew his way around a song and still had a great set of pipes — but it just didn’t go anywhere, either. That said, I did really enjoy the crunchy rockabilly of “Century” and the no-kids-for-me-please “Mamadaddydid,” as well as the central riff of “Angels Walk,” which just seemed to fall out of the sky every single time the song started.

As did his relatively smooth vocals, which I guess was appropriate to a song about the goddamn kid he’d said he was never going to have on “Mamadaddydid.”

I think I liked how atmospheric it was: sleigh bells augmenting the beat, piano popping in and out, and that insanely pretty guitar riff. But it never quite rose to the level of the song I would put Eventually into my CD player just to hear, like even “Knockin’ on Mine” or “World Class Fad.”

I think that Eventually was the epitome of the problem with Paul during the 1990s: everybody knew that he was a generational songwriting talent, but — especially outside of the context of The Replacements — nobody knew quite what to do with it. And while he played the game: these records came out, and he promoted them on TV and with tours. (In fact I saw him on this tour, with the late great Tommy Keene on guitar, and very much enjoyed it.)

But I don’t think his heart was ever truly in it, even if he was now older and wiser enough to not completely blow it up. And the result was songs like “Angels Walk,” a damn good song from a guy who still seemed capable of so much more.

That said, I had an opportunity to see Paul play a bunch of the Eventually songs in concert — with Tommy Keene (R.I.P.) on lead guitar — at the Fillmore in September of 1996, and while the newer songs paled compared to the ‘mats classics they were surrounded with, they didn’t pale all that much, and definitely sounded better somewhat roughed up.