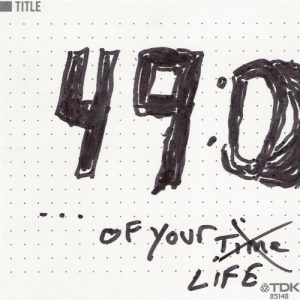 The only thing I know for sure about “Kentucky Risin'” is that it might not even be called “Kentucky Risin'”. And as a matter of fact, with the exception of the cover songs — you could say that about everything else on 49:00 of Your Life.

That’s because when Paul released it in late July, 2008, he just stuck the whole thing up there as a big 43:55 file (nope, 49:00 is not 49 minutes long) (unless you combine it with the “5:05” single), and let the rest of us sort it out. Because of the amount of music and the price point, only two platforms — Amazon & Tunecore — even bothered to put it out.

Here’s what I wrote at the time:

In reality, while 49:00 is a single file, it consists of several songs. Which means this: Paul Westerberg has figured out how to get people to listen to an actual album all the way through. There’s really no choice, especially since — as I write this — there doesn’t seem to be any actual song titles floating around. It’s all or nothing.

At first, it’s a bit overwhelming: with no real reference points like names and times, 49:00 comes across as just a jumble of songs, like you’re driving cross-country and stumbled across a radio station that’s playing some cool music you’ve never heard before, but the damn thing is fading in and out.

Because it’s not just full songs, it’s also song snippets. Then its two songs playing at the same time, and excerpts from cover versions that fade in and out, and then, suddenly, I’m in love, what’s that song?

No really, what’s that song?!?

It’s all a bit of a mess, really. But that’s OK, because it only costs forty-nine cents. In a strange way, Westerberg has used the internet to bootleg himself.

Because it’s such a mess, you might wonder who is going to listen to it more than once, and then you realize that because it’s a nice big digital file, what will eventually happen is that his fan base will come up with consensus names for all of the songs, and song snippets, and the time codes for everything.

Which is, of course, exactly what happened: almost immediately, the fan community came to a consensus on what the song titles were — except for the second track, which has been floating around out there as both “Kentucky Risin'” and “With or Without Her” — and anybody who could figure out how to use a program like Audacity sliced it into individual tracks for their personal mixes.

That way, futurelings who downloaded 49:00 from Amazon & Tunecore had a handy dandy guide as to what in the hell was going on. Except there weren’t gonna be any future downloads. Because of the covers. Near the end of the — I’m just going to use the word “album,” OK? — album, there is a medley of covers plus a stand-alone snippet of “I Think I Love You,” and rather go through the legal hassles, Paul had it taken down.

Which kinda sucks for folks in the future: it’s been over a decade now, and it kinda sucks there might be fans of the man who’ve never heard a song like the gorgeous “Kentucky Risin'”

I ain’t gonna stick around and spoil your morning
Whatever the weather, I’ll be walking
Believe me boy, these hills are gonna roll
With or without her

Powered by Paul’s faster-than-usual-but-still-simple drum bashing, and an ongoing tangle of acoustic guitars, “Kentucky Risin'” features Paul singing the title (assuming it is the title, of course) over and over again while the guitars spin out leads on top of each other.

It’s pretty much all hook, all the time, and if I had any criticism of 49:00 at all, it’s that it did kind of bury songs like this or “Devil Raised a Good Boy” or “Something in My Life Is Missing” or even a snippet like “Down on The Farm” in such a way that only the crazy hardcore fans might even ever care enough to dig up.

And — with the exception of the I Don’t Cares and the detour for the ‘mats reunion — that’s been pretty much the way its been ever since: Paul releases a song here or there, maybe a few, but hasn’t bothered to put anything album-length together since. Which is a shame, even if he’s had a lifetime pass since 1987.

Then again, he could drop something tomorrow. And that too, is kind of the fun of being a fan of the man: he remains wildly unpredictable, and as long as you can accept that — easier to do as we all get older and the world gets crazier — all you can do is wait and see.