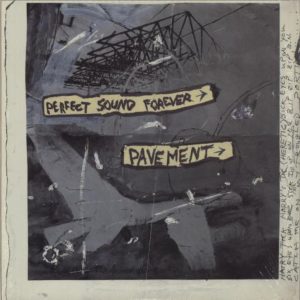 Let me admit something right up front: I didn’t buy any of Pavement’s three early EPs when they came out, so I didn’t actually hear “Debris Slide” until said EPs were helpfully collected in 1993 as Westing (By Musket and Sextant), but I’ll swear on a stack of remaindered copies of Douglas Coupland’s Generation X that “Debris Slide” is kinda where Pavement became Pavement.

It’s the first time where their unique combination of noise & melody, chops & looseness, and smarts & disinterest first coalesced into to the sound that ran me over like a fucking truck on Slanted and Enchanted.

“Debris Slide” just comes roaring out of the gate, guitarists Stephen Malkmus and Scott Kanneberg both spitting out spirals of noisy guitar, each battling the other as to whom could make the most horrific noise while Malkmus laconically sings what passes for the lyrics.

It’s so shambolic, practically falling-down drunk — listen to how the minimal words leave room for maximal noise — until suddenly it coalesces for the chorus, with Malkmus playing a riff that’s not so far off from the opening of “Smells Like Teen Spirit” (months before it came out), while they gang up on a call-and-response.

And meanwhile, drummer Gary Young — a decade older and centuries crazier — is all over his fucking kit, spinning and rolling and basically refusing to just stay anywhere near what might be considered a coherent beat. The whole song sounds like it’s continually falling off of a cliff, and yet because it never actually crashes to the ground until the very end, it’s absolutely mesmerizing. It shouldn’t work — and indeed for a lot of people, it didn’t — but to me, its eternally fascinating.