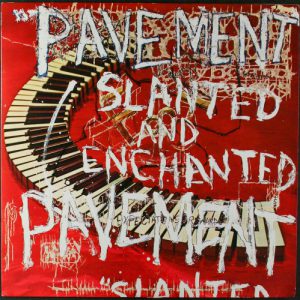 Instead, here’s “Loretta’s Scars,” which buries about a half-dozen hooks underneath a recording that sounds like the closest microphone was across the street. With Gary Young playing a nervous, jumpy beat, the guitars of Stephen Malkmus and Scott Kanneberg jaggedy and springy and nobody bothering to stay in the same place for very long as Malkmus sings deep in the mix.

As often is the case when Malkmus scales back on the lyrics, he leaves long spaces in between the words, the better to let the cacophony brewing underneath peak out, so the spaces between “Loretta’s” and “scars” are as important to the chorus as his singing. And then as what sounds like a organ joins in the fun, the’s a bridge or post-chorus or whatever where Malkmus drops to almost a murmur while singing a gloriously gorgeous lyric.

And then that’s followed by a wonderfully crazed guitar solo, which doubles and triples back upon itself with total and utter glee, and indeed is probably the best guitar solo on the entire album.

After the guitar solo, they basically do it all over again, except Malkmus gets stuck on seeing the sun — because, Mama, that’s where the fun is — as somebody attempts to hit every key of the organ (or whatever) at the same while Malkmus repeats “I can see the sun” until Malkmus cranks out the solo a second time like Eddie Van Halen in “Running With The Devil” and takes “Loretta’s Scars” to its end.

You know, as much as I love the lo-fi aesthetic that was probably as much of a financial necessity as it was an artistic choice, I’ll admit from the vantage point of a quarter-century plus that I would love love love to have maybe just a skosh more auditory clarity on “Loretta’s Scars,” because if you really dig into it, it’s as great as any song they ever made.