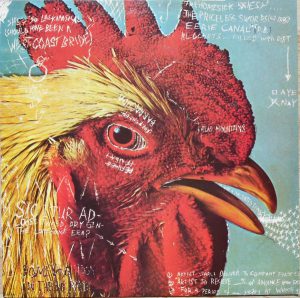 “So much style and it’s wasted”

Probably intended on a stopgap in order to bring the new guys — bassist Mark Ibold & percussionist/hype man Bob Nastanovich — into the studio to do a few songs before recording the full-length follow-up to Slanted and Enchanted, the Watery, Domestic EP turned out to the last work original drummer Gary Young played on.

None of which, I of course knew, back when I picked it up on early 1993 — Pavement were pretty much still shrouded in mystery at that point, despite Slanted and Enchanted making it to #2 in the Village Voice’s annual Pazz & Jop critics poll.

The only thing I knew for sure was that Watery, Domestic was probably my favorite EP since Chronic Town a whole decade prior; four songs that where chock full of noise, melody and guitar hooks you could sing. While there wasn’t a duff track among the four, my favorite was the almost-strutting “Frontwards,” which alternated sprialing feedbacky guitars with almost normal-sounding chords as Stephen Malkmus laconically sings:

I am the only one searchin’ for you
And if I get caught
Then the search is through
And the stories you hear, you know they never add up
I hear the natives fussin’ at the data chart
Be quiet, the weather’s on the night news
Empty homes, plastic cones
Stolen rims, are they alloy or chrome?

In a 2015 interview, Malkmus said that why was trying to dredge up with “Frontwards” was Stockton circa the late 1970s: “People just starting to smoke, and chicks with those combs and feathered hair and those tight jeans that make camel toes, and migrants, farm workers and stuff.” And and of course, that could be Fresno — a connection I made subconsciously at best.

The connection I made consciously, of course, was with the first chorus, which was probably a send-up, but also could be declaration of purpose.

I always loved that chorus, especially the way that Malkmus gets more and more insistent as he sings through it, by the end screaming “SO MUCH STYLE AND IT’S WASTED!” Probably in character, but possibly not, either. And around that time in my life, I had been thinking about Generation X, and who I was at 30, and whether or not my style — or me, really — was being wasted, so it really hit home for me.

Also hitting home: the super cool stoptime drum roll vs stun guitars part that immediately followed it: Gary Young’s last great moment on a Pavement record, coming out of nowhere in the middle — and again at the end — of a song that was really full of more confidence that anything they’d previously recorded.