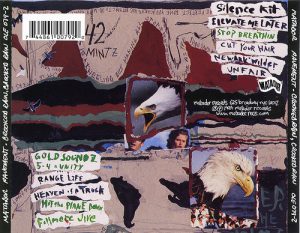 “This is the city life”

Most great albums announce their greatness within just a few seconds: the synth that opens “Baba O’ Riley,” the guitar riff of “Smells Like Teen Spirit,” the stolen drumbeat of “Just Like Honey.”

Others? Well others take a bit to get going. Crooked Rain, Crooked Rain falls into the latter camp. You put it in the CD changer, and it acts like its surprised that you chose it, so it stumbles around a bit gather itself together — random bass notes from Mark Ibold, new drummer Steve West hitting various toms like he’s doing a sound check, Stephen Malkmus trying to get his squawking guitar under control, and you can be excused if you want to ask them if you should come back later when they’re ready to play.

But just when you’re about to pop the disc out in frustration, Malkmus pleads “help us, Scott,” and Scott Kanneberg responds with a thick meaty guitar riff that sounds like you’ve been friends with it for your entire life, accompanied by a fucking cowbell played by Bob Nastanovich, and after a guitar duel, a long falsetto sigh from Malkmus, “Silence Kid” finally launches into its first verse.

Meanwhile, Malkmus still really hasn’t gotten rid of the etherial falsetto he started with and so it continues into the chorus, which is all drum builds and guitar squiggles and Malkmus holding the word “liiiiiiiiffe” like his liiiiiiiiiife depends upon it.

And then you realize that the opening was all about misdirection: about making you wonder exactly what the hell was going to happen next. Which is a feeling you get a lot with Crooked Rain, Crooked Rain: you never know what direction any song is going to take, even if you’ve heard it as many times as I have. Which is good, because I don’t know what direction my writing is going to take as I work my way through a record that has so many songs that I well and truly love as much as I love any songs by anybody.

And if you’re listening to the lyrics, you might be confused by the fact that the song seems to be listed as “Silence Kit,” even though Malkmus is singing “silent kid,” but you probably don’t care because if you know anything about Pavement, its that they like to fuck around with their song titles. But in this case, it wasn’t on purpose: apparently, there was a printing error on the CD, which led to the confusion.

Naturally, the band was fine with that, and purposefully called it “Silence Kit” — which to be honest, is a way better title — on the massive 2004 reissue.

Meanwhile after the second verse, “Silence Kid” crashes against itself, and waltzes around while Malkmus quite literally screams about sex, drugs and rock ‘n’ roll against a stolen Jimi Hendrix riff.

Hand me the drum stick, snare kick
Blues call and response
I lose myself in change
Into the spotlight
Ecstasy feels so warm inside
Till five hours later
I am chewin’
Screwin’ myself with my hand

“Silence Kid” was the perfect opening to Crooked Rain, Crooked Rain: it announced Pavement’s growth and ambition while still retaining the ramshackle charm of their earlier records, and after it was over, you couldn’t wait to hear what they had up their sleeves for the rest of the record. SPOILER ALERT: some of the very very best songs of the 1990s, or ever, really.