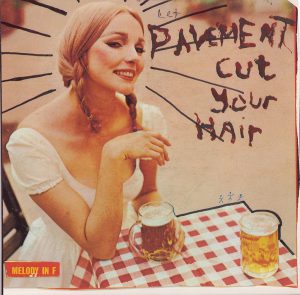 “Did you see the drummer’s hair?”

First off, it’s always given me flashbacks to Pete Townshend singing in first person character “Why should I care / If I have to cut my hair” but that’s on me, as Pavement’s “Cut Your Hair” isn’t anything at all like The Who’s “Cut My Hair,” a song which instantly pivots to Jimmy’s issues fitting in with his peers and his parents.

Stephen Malkmus has something different to say about the whole cutting of the hair, at first advising a friend not to cut her hair for some dude and then exploring the relationship between fashion and the music biz.

But even more important than all of that is the wordless chorus which opens the song. Everybody sing!

It’s weird: those vocals are slightly down in the mix, battling for space with Kanneberg’s crunchy rhythm guitar and Malkmus’ lead guitar framing it with delicate jangly licks that are practically almost their own harmonies, all of which calms down as the first verse begins.

Darling don’t you go and cut your hair
Do you think it’s gonna make him change?
(I’m just a boy with a new haircut)
And that’s a pretty nice haircut
Charge it like a puzzle
Hitmen wearing muzzles
Hesitate you die, look around, around
The second drummer drowned
His telephone is found

Of course, as the verse progresses, the guitars pick up, getting fuzzier and fuzzier, only to pull back as they go back into the wordless chorus almost arbitrarily. It’s a great contrast: the sarcastic lyrics sung with varying degrees of diffidence and anger with the utter joy of the chorus.

There is so much going on here. Anybody who has ever been part of any music scene is probably familiar with the feelings he’s working through with this verse: worrying about new bands, lying to them about their worth, battling your own worries about your own worth, and wondering deep down whether any of it is worth all of the pain, heartache and effort. Oh, and by the way, did you see the drummer’s hair?

Given how utterly pure pop for now people “Cut Your Hair” was, had they just gone for anything resembling a conventional guitar solo after the second chorus — like maybe doing the melody a la “Smells Like Teen Spirit” — it could have even broken the pop charts, but instead they fuck it all up by dropping into a rave-up. Well, not really a rave-up, more like a rave-around: Steve West breaking into rolls; Scott Kanneberg bouncing notes back and fourth while Malkmus ends up shredding his guitar into a thousand pieces, after which they drop into the epic final verse.

That final verse is alternately hilarious — NO BIG HAIR! — and confusing: is he saying that you’re bought like a song or you’re bought if you sell a song? Or something else? Also, is he singing “career” — which makes contextual sense — “Korea,” or both, just take the piss out of himself? My guess has always been the latter, because it’s more fun, and that’s at the nut of what makes “Cut Your Hair” so great: it’s fun as fuck, both framed and defined by the wordless chorus.

And I clearly wasn’t the only person who thought this: probably helped by a silly but-on-brand video, “Cut Your Hair” peaked at #10 at Billboard’s modern rock charts in May of 1994, when we clearly needed something this much fun to cut through all of the sadness following Kurt Cobain’s suicide. That was the highest they ever charted in any context, meaning that “Cut Your Hair” is the only Pavement song that non-Pavement fans might know. Which, all things considered, is a pretty good thing.