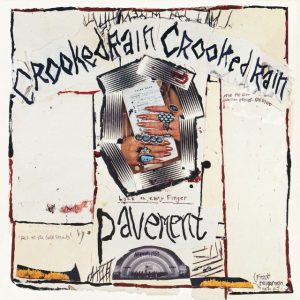 Somehow, despite all of the stone classics surrounding it, “Unfair” turned out to be my favorite song from Crooked Rain, Crooked Rain — meaning that it’s my favorite Pavement song, period — as it’s a near-perfect combination of screeching rage, wild guitars, hilarious lyrics and a candy-sweet melody.

To to be honest, melody does take a bit of a backset in this case, but not so much that they don’t get away with producing a song that doesn’t have any chorus at all. Instead, “Unfair” starts at about an intensity level of 9.5 and ends up going to 11. At least.

With Stephen Malkmus and Scott Kanneberg’s guitars scraping against each other as well as harmonizing to the lyrics while drummer Steve West is all over his fucking snare drum, “Unfair” leaps out of the starting gates at a full gallop, but somehow builds to a whole new level while Malkmus holds the last syllable of “Beverleeeeeeeeeeeeeeeeeeeeeeee.” And he’s only just beginning.

As per usual with Malkmus, at least on this record, if he’s criticizing someone else or something else, he’s got to also point the finger at himself — it’s impossible to live in the world and not be complicit in some of its flaws and sins — and he’s about to get even more critical.

So here’s the thing about me and “Unfair” and the spring of 1994. I knew that I had to get out of Fresno. And I knew equally as much that I needed to go north to my beloved Bay Area, and not south to the devil of Los Angeles, because if there was one thing I knew for sure, it was that I didn’t want to live L.A. Not to mention that this verse could really have only come from somebody who grew up in the Central valley, which was always partially defined by the giant canals that brought much needed water from the north to the south.

Meanwhile, Malkmus is getting more & more incensed, his voice desperately scraping against the ever-present guitars — both of which are getting hookier as he’s getting ever more disheveled.

After the last line, his voice nearly fades away, but luckily the guitars come back in, and along with some well timed rolls from West pick him back up and then build into an absolute frenzy, sounding like Sonic Youth playing the coda to “My Generation.” And on top of all this, Malkmus both loses it and looses it, every single word like a psychotic break.

And then, just like that, “Unfair” collapsed under its own weight, a slacker anthem for native Californians that I still think should be our state song. Of course, the ironic thing was that — like nearly all off Crooked Rain, Crooked Rain — “Unfair” was written and recorded in a loft in New York City, 3000 miles away. But then again, perhaps it took that kind of distance to write a song this so close to home.