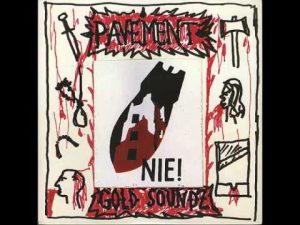 “So drunk in the August sun”

I’ve never owned Crooked Rain, Crooked Rain on vinyl, but how much fun would it have been to be able to turn the record and have a second to recover from the frenzy of “Unfair” before the gorgeous opening of “Gold Soundz” kicks in. Instead, on the CD, it’s weirdly jarring, like if you had one of those multi-disc carousel changers and it somehow started playing a totally different CD.

And so, the guitars jingle and jangle and even jongle as Malkmus sings as prettily as he possibly can.

Go back to those gold soundz
And keep my advent to your self
Because it’s nothing I don’t like
Is it a crisis or a boring change?
When it’s central, so essential
It has a nice ring when you laugh
At the low life opinions
And they’re coming to the chorus now

Like so many of the songs on Crooked Rain, Crooked Rain, “Gold Soundz” is cryptically meta to the point of dizziness: “is this a crisis or a boring change?” sums up the songwriting process on multiple levels. Of course a boring chord change isn’t really a crisis, but it sure can feel like one in the moment, so it probably is.

And that’s topped by announcing the chorus, which is barely even a chorus, except in context, because “Gold Soundz” was yet another almost unbearably lovely song — shit, Pitchfork picked it as the greatest song of the 1990s — it doesn’t really have a traditional chorus, depending on Stephen Malkmus repeating a syllable to carry the weight of the whole thing.

After having laid off during the entire first verse, drummer Steve West crashes in at the beginning of the — OK fine — chorus, rolling on his snare while Malkmus repeats “cret” over and over again. After the second time around, after Malkmus sings “cret” what feels like a couple of dozen times, West drops out again, picking back up for the guitar solo, placing nice little double backbeats throughout.

And how about that guitar solo? There isn’t any noise whatsoever on “Gold Soundz” and the place where you might expect some kind of rave-around like on “Cut Your Hair” or “Unfair,” they instead double down on the pretty. So Stephen Malkmus plays the the gold soundz he wants us to go back to, while Scott Kanneberg circles around him, adding counterpoint without distracting. They would have never gotten away with this had they made an entire record like this, but coming after the raging “Unfair” and just before the jazz — or “jazz,” really — of “5-4 = Unity,” the guitar solo in “Gold Soundz” is a tonic, a balm, a cold beer in the hot August sun, and sets up the final verse perfectly.

So drunk in the August sun
And you’re the kind of girl I like
Because you’re empty and I’m empty
And you can never quarantine the past
Did you remember in December
That I won’t need you when I’m gone
And if I go there, I won’t stay there
Because I’m sitting here too long
I’ve been sitting here too long
And I’ve been wasted
Advocating that word for the last word
Last words come up all you’ve got to waste

There was always a lot made about Stephen Malkmus’s diffident bordering on smug stage manner, but too me that always just seemed the the reaction of a super smart guy who loved super dumb music, but could never fully embrace losing himself in that music, so he kept just enough distance so you could think he thought he was better than you.

Obviously, anybody who could write a phrase like “you can never quarantine the past” sure as shit wasn’t empty, but that didn’t mean that the sure as shit didn’t have the same kind of self-doubt that the rest of us did, especially hanging out in the depths of the summer with someone you know ain’t good for you; or vice-versa.

And to me, it was just insane that any record could have songs as utterly weird, smart, rocking and completely unique to each other and the rest of the planet as “Cut Your Hair,” “Unfair” and “Gold Soundz” so I listened to Crooked Rain, Crooked Rain constantly during that transitional spring and summer of 1994 ostensibly to figure out why, but mostly because I found it so beautiful.