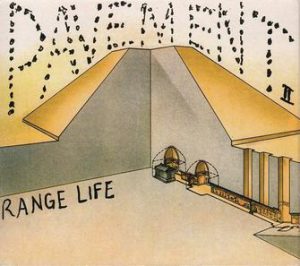 In a weird way, it’s the same kind of compare and contrast that Pete Townshend was writing about on The Who’s “Naked Eye,” where they extoll drugs, sex & fast cars before pulling the wool out with “it don’t really happen that way at all.”

After the glow, the scene, the stage, the set
Talk becomes slow
But there’s one thing I’ll never forget
Hey, you gotta pay your dues
Before you pay the rent

Over the turnstiles and out in the traffic
There’s ways of living
It’s the way I’m living
Right or wrong, it’s all that I can do
And I wouldn’t wanna let you be

Since Stephen Malkmus is more arch than Townshend, it was hard to know exactly which side of the rock ‘n’ roll life vs. range life divide he fell on at the time, because — to me, at least — settling down into a range life seemed like something that I wasn’t ever capable of doing. Nor was it even something I wanted, though I’d already aged past the behavior described in the second verse.

Run from the pigs, the fuzz, the cops, the heat
Pass me your gloves, this crime, it is never complete
Until you snort it up and shoot it down
You’re never gonna feel free

Out on my skateboard, the night is just humming
And the gums smacks are the pulse I’ll follow
If my Walkman fades
But I’ve got absolutely no one
No one but myself to blame

But don’t worry, we’re in no hurry
School’s out, what did you expect?

Weirdly enough, the easy rolling music — featuring ongoing fluttering lead guitar from Malkmus, especially on the solo, as well as some really pretty piano by engineer Mark Venezia throughout — pretty much summed up both the temptations and the distance of the titular range life, especially when maybe you’re not all into the folks with whom you happen to be touring.

Out on tour with the Smashing Pumpkins
Nature kids, I/they don’t have no function
I don’t understand what they mean
And I could really give a fuck

The Stone Temple Pilots, they’re elegant bachelors
They’re foxy to me, are they foxy to you?
I will agree they deserve absolutely nothing
Nothing more than me

Look: even despite the fact that Siamese Dream was still in my heavy rotation at this time, this verse was absolutely fucking hilarious to me in 1994, and a quarter-century later, give or take a couple of tragic deaths as well as my begrudging recent realization that “Interstate Love Song” is really kind of a jam, it still is.

But shockingly, not shockingly, Billy Corgan didn’t agree with me. And apparently had enough clout to get Pavement tossed from the 1994 Lollapalooza tour, which the Pumpkins were headlining only because Kurt Cobain killed himself.
So thanks for that, Billy! That said, it means that there is an alternative universe where I get to see Nirvana & Pavement (plus Breeders, Beasties, Green Day, George Clinton & A Tribe Called Quest) at Lolla instead of the unraveling Smashing Pumpkins.

On the other hand, I might not have been inspired to write one of my favorite pieces I will ever write about that show had the Pumpkins not headlined. That said, that piece perfectly encapsulated everything I felt about music in 1994, as well as why if forced to choose — and why would you do that? — I’d choose Malkmus over Corgan every day of the week, especially since Billy Corgan would never ever leave an extant take that had such an obvious mistake as the “I/they” fuck-up that just made the whole thing funnier and slightly more ambiguous.

California Slackers > Midwestern Hard-Asses is the gist of what I’m saying.

In the end, Malkmus realizes that the range life is still just a dream at this point, and instead, with the piano turning into a pianner, he and Scott Kanneberg steal a Billy Squier riff for the fuck of it and drive “Range Life” home, the damage already done.

In his Rolling Stone retrospective on the 25th anniversary Crooked Rain, Crooked Rain, Rob Sheffield pointed out that, for him, the album effectively ended with “Range Life,” and yeah, me too at the time. That’s because “Range Life” was followed by the meandering “Heaven is a Truck,” Kanneberg’s noisy-for-the-sake-of-noise “Hit the Plane Down” and the closer, “Fillmore Jive” which somehow felt too classic rock for an album that was completely classic rock.

But now, I can see the charms of all three songs, especially “Fillmore Jive,” with its desperate need for sleep and even more desperate guitar solo, and looking back on it, I think that they also presaged what Pavement was going to do next, the still difficult Wowee Zowee. But we’ll dance with that one tomorrow.