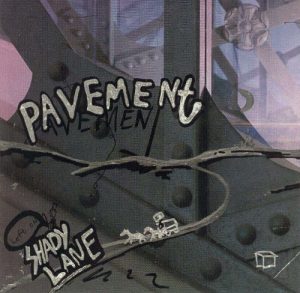 Recorded with the redoubtable Mitch Easter, Brighten The Corners is definitely a 180 from the eclecticism of Wowee Zowee — in fact, it’s their most consistent-sounding record: the sound of a band that had come into their own as a band. I don’t think they ever sounded more like a band than on this record, and sure, some might miss the noise and sloppiness, but it wasn’t like that stuff was erased from the previous three records.

So I think of Brighten The Corners in the tradition of fourth albums like Loaded, More Fun in the New World or Life’s Rich Pageant: here’s a whole bunch of great songs played pretty fucking straightforwardly. Oh, and so many fucking great lyrics, too.

And so after an opening track that is actually disarmingly dissonant (and has an affectionate Geddy Lee reference, to boot), the “Shady Lane” shows up with just Malkmus and a repeating guitar.

As the rest of the band comes in, Malkmus continues:

A redder shade of neck on a whiter shade of trash
And this emory board is giving me a rash
I’m flat out
You’re so beautiful to look at when you cry
Freeze, don’t move
You’ve been chosen as an extra
In the movie adaptation
Of the sequel to your life

And yeah, sure there isn’t a noisy guitar within miles of any of this, but there is some great interplay between the guitars of Malkmus and Scott Kanneberg and bassist Mark Ibold, curling and weaving in and around each other in a way they really hadn’t done before: in the past, Pavement’s music always seemed like it was on the verge of falling apart at any second — and certainly that was always part of the thrill — but of course, these guys had now been playing together for the better part of a decade, and they couldn’t help but get tighter, which to me just added a new dimension to my fandom, because they were still weird as hell, especially if you listened past the indelible melody of the chorus:

There is a whole lot going on here: at the beginning of the chorus, there are weirdly dissonant notes floating around the words, but the second Malkmus hits the “oh my god” part, the guitars start following the melody around like lovesick puppies until the whole thing collapses and starts over again.

To me, “Shady Lane” is a bit of a spiritual successor to “Range Life,” but with way more sincerity. Way back in 1994, when Malkmus sang “I want a range life, so I could settle down,” you could be forgiven for going “yeah, right.” But three scant years later, he’d expanded to claiming that “everybody” wanted a shady lane, and you kind of agreed with him.

As a song proper, “Shady Lane” ended after the second chorus, but the track continued with a cool little instrumental called “J vs S” that actually set up the next song on the album — “Transport Is Arranged” — pretty well.

In any event, “Shady Lane” was issued as a single, which went absolutely nowhere here in the U.S. — “Cut Your Hair” clearly being a fluke — but it did became their first Top 40 single in the U.K.