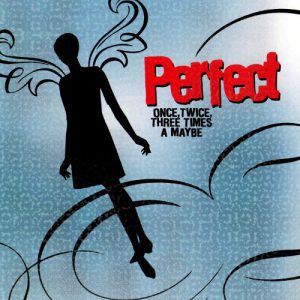 Bash & Pop, however, broke up after that record, and Tommy subsequently formed Perfect, whose 1996 debut EP, When Squirrels Play Chicken, rocked a little harder and showed some definite promise for the full-length that they were recording with old friend Jim Dickinson.

Except that the full-length didn’t come out as expected: in a case of big business fuckery, it got shelved by the large movie corporation that had bought their distributor. This led to the disintegration of Perfect in 1998 and Tommy’s much-discussed stint as the bass player for Guns N’ Roses. Quite naturally, the album, entitled Seven Days a Week leaked — I know I got a copy — and in 2004, Rykodisc put it out officially under the much less good title of Once, Twice, Three Times a Maybe.

In both cases, the lead-off track was the punk rock raver, “Better Days” which encapsulated his strengths, well, perfectly. Kicking off with a speedy rhythm section led by Tommy on bass, “Better Days” piles on the guitars by Dave Phillips and Marc Solomon whilst gliding towards its chorus.

And as Tommy screams “better days are here again”, drummer Gersh knocks off a killer drum roll into an awesomely messed-up guitar solo. Perhaps they could have used another take, but that’s not what this music is all about: like the ‘mats, it was about capturing a particular rock ‘n’ roll moment.

The irony of writing song called “Better Days” just prior to his post-‘mats solo career imploding to the point where he ended up taking the Guns N’ Roses gig was most certainly not lost on Tommy, who also released his first solo album under his own name in 2004, as well. Since then, there’s been another solo album, and another Bash & Pop album, which was nearly as great as the first.