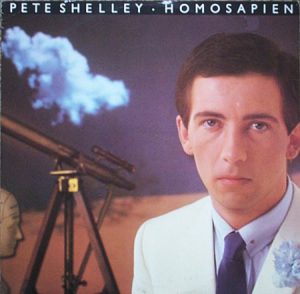 Pete Shelley had a long, interesting and pretty great career.

When he died at the end of last year, most of the focus was on his long career with the Buzzcocks, who were, if not the first British punk band to successfully yoke pure pop with loud fuzzy guitars, were most certainly the greatest, their initial run lionized forever, but their second act st

But after he died, I was reminded that the Buzzcocks were way more than Singles Going Steady — their albums were often weird and experimental, contrasting the pure pop songs with more formal sonic experiments, culminating with A Different Kind of Tension, and the wildly disparate singles that followed it.

So, in retrospect, it’s not totally surprising that Pete Shelley’s first post-Buzzcocks solo album would continue in this direction, so working pretty much with just producer Martin Rushent, Shelley came up the burbling stew of trashy synths, tinny drum machines and phased out guitar that dominated Homosapien felt pretty fucking weird.

But, of course, he was still a world-class melodicist, so it was pretty much impossible not to want to sing along with a song like “Homosapien,” which got banned from the BBC for its lyrics. And while these days, artists singing about gay sex ain’t that big of a deal, in 1981, it was a goddamn scandal. But clearly not to Shelley, who had written the song in 1974.

I’ll admit, even though I wasn’t anywhere near what the kids called “woke” in the early 80s, I still had more issues with all of those synths than anything else, but every single time Shelly hit the word “ho-mo-saaaaaa-peee-innn” — and given that he was always a master of repetition, that was a lot — was hook central to me.

In a more enlightened era, “Homosapien” might have a been a huge worldwide hit, but instead, the subject matter made its initial impact a bit more spotty: top 10 in Canada & New Zealand, but that BBC ban fucked with it in the U.K., and no way in hell it was going to get on U.S. radio — other than college — though it did become a relatively big dance club song.