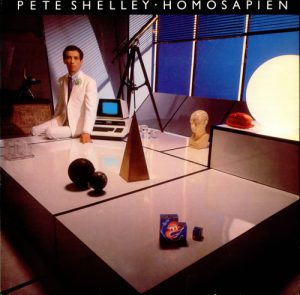 My favorite song on the Homosapien album, and one of my favorite Pete Shelley songs period, the introvert’s anthem “I Generate a Feeling” was to me the perfect marriage of his manic voice and the synth-pop soundscapes he was generating.

Leading off with a synth whistling “hey check me out,” and featuring a drum machine seemingly set to “meander,” it seemed to me like “I Generate a Feeling” just kinda wandered around itself, never completely figuring where it wanted to end up. Which was kinda ironic for a song about getting in touch with yourself.

When I close my eyes I have a world inside of me
Peopled by my thoughts of you
Nnd how things ought to be
Here I spend my time
And do the things I want to do
Helps to pass the day and it keeps me happy too
I, I, I generate a feeling

But that was fine by me: I loved the tricked-up guitar playing a modified Bo Diddley beat; the weird time signatures, the melody, and most of all Shelley’s singing, which pushes the song forward at a relentless pace, his voice woozy and distorted as well.

In my psychic scenery there’s a special place I go
Here I am recharged with energy from down below
Nothing is between all we feel is just inside
Generate that feeling and the world will come alive
I, I, I generate a feeling

In fact, it’s all woozy and distorted: after the second verse there’s a synth solo and it constantly feels like its phasing in and out of reality: playing the same phrase over and over again, like it didn’t realize that it had already played that phrase, because it its reality, it hadn’t yet.

And then after that, Shelley does his best to recreate that euphoria for us, a series of moans and screams and even yelps that help take the song to its fade. In a weird way, the jumpy rhythm and the phased out guitars could easily been translated to the Buzzcocks, minus all of the synths & drum machines, natch, which was probably the reason I loved this son so much.

Shelley recorded a couple more solo albums in the 1980s, 1983’s XL-1, which I didn’t like as much as Homosapien, and 1986’s Heaven and Earth, which I never heard. After that, in the late 1980s, he made up with and reformed the Buzzcocks, which were still going in one form or another (always with Steve Diggle) when he unexpectedly died, and generated a whole shitload of feelings.

“I Generate a Feeling”