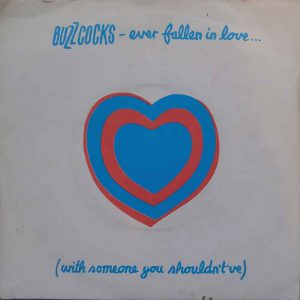 It’s either late 1980 or early 1981, and I’m feeling depressed about something or other. Probably an unrequited crush, because that could have been my major at Fresno City College.  So I decided to do what I did then: go to Tower Records.

In this particular case, I didn’t know what I was looking for. But I knew that I wanted to try something that I’d never ever heard even a note of, and I knew that it had to be punk or post-punk, as I was slowily – with the great help of Trouser Press, Musician and Creem (since this was back during the time that music blogs were known as “magazines”) – working my way through the more critically-acclaimed music of the late 70s & early 80s.

And – I actually remember this – I remember telling myself that maybe the Buzzcocks compilation with the cool cover was the right combination of new and familiar to snap me out of my doldrums.  Said compilation, of course, was the now-immortal Singles Going Steady.

And, yeah, my doldrums were snapped before I’d even flipped the album over. How could it not be?

Look, I know that it’s a singles compilation, and therefore shouldn’t “count,” but fuck that: Singles Going Steady is as unified sounding as any album ever and doubles as an amazing greatest hits, to boot. Pete Shelley knew what he wanted to say, he and Steve Diggle knew how they wanted it to sound, and along with crack rhythm section of Steve Garvey & John Maher, they applied that knowledge for 16 gloriously prescient punk-pop songs..

And the most glorious (of the A-sides) (barely, over “Orgasm Addict” and “Everybody’s Happy Nowadays”)  is probably the best-known: “Ever Fallen in Love (With Some You Shouldn’t’ve)” is simultneously as perfect as punk rock gets and as perfect as pop music gets. The verses are dominated up by dueling guitars and chattering drums, while the chorus builds and builds and builds, breaking up the title phrase into a zillion different pieces.

Not here of course. Not for decades, but the sonic template was set right here, with the Buzzcocks.

“Ever Fallen in Love (With Someone You Shouldn’t’ve)”