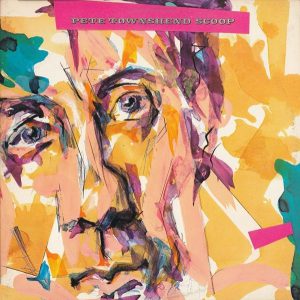 And even though Townshend didn’t start officially releasing solo albums in the early 1970s, he was doing that work from the mid-1960s, putting together elaborate demos from the very beginning. How far back, you might ask? How about this: the stop-time, call-and-response and stuttering on “My Generation?” Those are all on Townshend’s original demo, even though it was just him overdubbing a bass and vocals over an acoustic guitar.

By 1967, he’d taught himself to play drums, and the demos from that day forward got increasingly elaborate, to the point where The Who’s versions of those songs were often essentially covers. Of course, much of the time, what Keith Moon, John Entwistle and Roger Daltrey brought to the table elevated the songs into the stratosphere enough so when the first official collection of Pete’s demos, Scoop, came out in 1983, I immediately gravitated to the songs that The Who had never recorded, like the Motown-style banger, “Politician.”

With an accidentally cool drum sound that sounded like it was beamed in from outer space, and a rhythm guitar riff stolen directly from Martha & The Vandella’s “Heat Wave,” — which The Who had covered — “Politician” starts off with the usual thoughtful lyrics:

And with a little extra lead guitar coloring the edges of the song, “Politician” bounces directly into the chorus.

I have a little trouble,
To keep on getting angry with the world
But I feel a little better when ever I say to myself

And there’s so much going on here: the harmonies he added, the contrast between the speedy run throughs of “I know when I’m right, I know when I’m wrong” at the beginning of the chorus and the long, held out “I knoowwwwwwwww” during the second half.

After that, “Politician” breaks down just a bit, so Pete can sing — in the same scary-ass voice he would later use on “Acid Queen,” — the song’s bridge.

Theirrrrrrrrrrrr he comes: the politician
Heerrrrrre he comes
(Wacha want)

And the end of the song, he goes back to the the elongated “I knnnnnnnnnnnow” over and over again, while bringing adding just the hint of a guitar solo that would have graced a live version which takes it to its fade.

While I’d never rate “Politician” as a top tier Townshend tune, it’s still high-quality enough that I don’t know why the rest of the band didn’t want to record it as part of 1968’s unreleased Who’s For Tennis? And in 1983, it was kind of a revelation for me: while I already knew that the Who’s catalog was a fucking mess, I had no idea that there were these kinda songs that didn’t even get recorded.