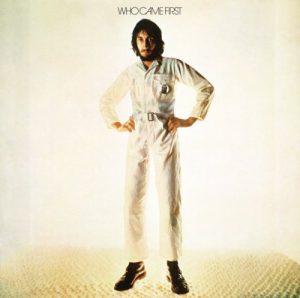 Two of those demos were “Pure And Easy,” at that point still unreleased by The Who (though it would show up in a couple of years on Odds and Sods) (and in a couple of years in this very space), and “Let’s See Action,” which was part of a triptych of non-album singles — the other two were future Certain Song “Join Together” and “The Relay” — that kinda decorated who’s next.

While The Who’s version of “Let’s See Action” was really really good — I mean, it’s the fucking Who, for chrissakes — I’ve always preferred Townshend’s version from Who Came First, which is both longer and more energetic than the version by his band.

Kicking off with an acoustic guitar, rolling piano and handclaps (which might be the reason), “Let’s See Action” is an exercise in repetition, especially lyrically, where after a couple of opening verses, it seems like 98% of the song is Pete singing the same verse over and over again, eventually playing call-and-response with himself over his jagged rhythm guitar, piano craziness and the ongoing handclaps.

That’s actually not true, of course: there’s a great Townshend guitar solo early on, and about halfway through, and the song breaks down into a long, gorgeous synth-drenched mid-section where The Seeker wants to let us know that it’s OK if we don’t find exactly what we seek, because life is the journey, not the destination.

Then, after revving back for for another round of imploring us kids — for whom he wrote the song, natch — to see action, people, freedom, etc, there’s another breakdown, a spidery guitar lead, and over handclaps, quick drum rolls and a two-note piano, “Let’s See Action” has one last pearl of wisdom for us.