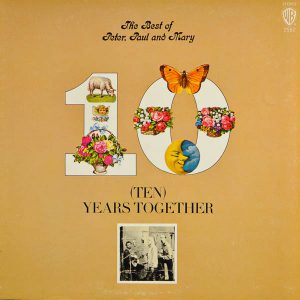 That said, while Peter, Paul & Mary still aren’t my thing, I can certainly hear their harmonies and respect for the songs they were singing, most of which were by other people, the biggest exception being their first massive hit, “Puff, The Magic Dragon.”

Here, let me put it in your head.

Puff, the magic dragon
Lived by the sea
And frolicked in the autumn mist
In a land called Honalee

You’re welcome. I’m pretty sure that, as a kid, I was attracted to “Puff, The Magic Dragon” not nearly as much as the fact that it was a song about childhood — unless it was a song about weed, of course — but because “Honalee” rhymed with “Connelly.”

And so it goes. I guess one of the unique things about “Puff, The Magic Dragon” in popular culture was its depiction of a dragon as a benevolent figure, a harmless play friend — “frolicked in the autumn mist” is just a gorgeous, evocative phrase — as opposed to a ruthless, fire-breathing destroyer of cities. For example.

One of the things I never noticed as a kid was that once Jackie Paper — no really, it’s not about weed — outgrew Puff, Puff basically died of grief. Which I think the folks in Westeros better fucking hope will be what Drogon does. Or did. Maybe GRRM will write a whole chapter about Drogon destroying Pentos or some shit.

In any event, somehow “Puff, The Magic Dragon” has survived as both a harmless song about childhood or as a metaphor for getting really stoned, though if you actually listen to it, it’s way way way way too sincere to have any subtext at all. Which is a weird thing to say about a song about a magic dragon, though, technically aren’t all dragons magic?