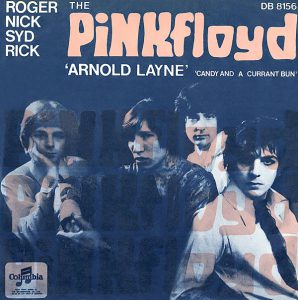 While I am not someone who worships at the altar of the departed-before-he-departed Syd Barrett, there was definitely something interesting about what seemed to be his conflicting needs to write both somewhat concise pop songs and create long formless space jams.

And, indeed, it was a tension that kinda fueled his band long after he was gone, but I guess we’ll get to that soon enough, as I’m one of those people who think that Pink Floyd’s best work was done in the mid-1970s, though I have come around a bit to the charms of Barrett-era Floyd. Or at least the shorter songs.

So, as a verse-chorus-verse single, “Arnold Layne” is kind of a disaster: Syd’s voice is kinda flat, the harmonies are perfunctory, the rhythm section of Nick Mason & Roger Waters never fully establishes a groove and Richard Wright’s keyboard solo halfway through seems imported from a completely different song. Not to mention the kink-shaming subject matter — a guy who steals women’s knickers from clothing lines in order to wear them — got them banned from the BBC, despite the fact none of what I just wrote is actually in the lyrics.

Which is why, as an introduction to what The Pink Floyd were up to, “Arnold Layne” is an utter triumph: it’s spooky, atmospheric, lyrically whimsical and psychedelic as all fuck. And while Joe Boyd (future Richard Thompson and, er, R.E.M. producer) captured a pretty incendiary performance, he didn’t really get a great sound, with the exception of the aforementioned keyboard solo, which burns bright in the summer night.

And people read deeper into it than was what writ in the actual text, which was going to happen for pretty much the rest of their career, no matter who was at the helm.