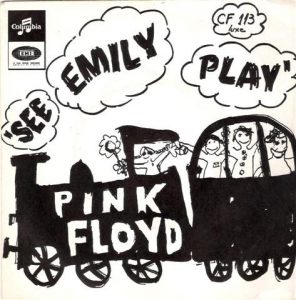 Released as a single in the U.K. just prior to their debut album, and rudely stuck on the reshuffled U.S. version (buh-bye “Astronomy Dominé”), “See Emily Play” is a primal piece of psychedelic pop that — in the U.K. — definitely balanced mind-blowing music with a big giant hook-filled chorus.

“See Emily Play” starts off with Syd Barrett’s guitar and Richard Wright’s organ re-entering the atmosphere, as “See Emily Play” definitely takes place on Earth, Syd having been inspired by apparently seeing a girl sleeping in the woods while he was high on acid. As you do.

In any event, even in the final kinda muddy mono mix, “See Emily Play” is absolutely bursting with ideas: backwards guitars and organs, spooky noises, explosions, backing vocals from nowhere, and a cool two-note bass motif from Roger Waters that pops in and out of the song.

None of which would have mattered if “See Emily Play” didn’t always come around to its absolutely massive chorus.

Even Barrett plays it straight during the chorus, slashing chords on his guitar like a Kinks song, while Nick Mason builds and builds during the second half as Barrett, Wright and Waters all harmonize on “seee-eeee-eee Emily Play.”

They also have a neat trick where after each chorus, something different happened. The first time, the whole song stops, and you hear a quick speeded up musical box, and its off-putting to say the least. The second time frames her playing as something a bit more sinister, a bit more ominous, as Barrett sets his guitar to stun and Wright tries to to shield himself with the organ.

And the third time, they decide to head back to space, because people here are just a bit too weird.