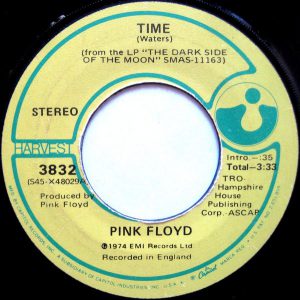 On the other hand, one of those two actual songs is pretty close to my all-time favorite Pink Floyd song, the absolutely stunning “Time.” Even as a callow teenager, “Time” struck me as pretty true, and 45 years later, well, you know. “Time,” of course, famously starts off with a whole bunch of clocks going off — a perfect “WAKE UP, HERE COMES WISDOM” for the legions of stoners who had been lulled by the calm at the end of “On The Run,” — followed by Roger Waters making a tick-tock on his bass while Nick Mason circles around his rototoms for a couple of minutes while Wright plays atmospherically doomy notes.

Because even on a song that acknowledges that we’ve all got limited time, Pink Floyd is still going to take their sweet getting to the point. That’s just how they (slowly) roll. Eventually, they break into a funky groove and David Gilmour sings the opening verse:

There really isn’t a chorus on “Time,” but there are disparate vocal sections. On the first half of each verse, Gilmours singing by himself, angry and raspy, followed by the calmer Wright singing his last vocals in this incarnation of Floyd while backed by seemingly the whole of England — really just four background singers run through effects — as a heavenly choir, as he delivers the button for each verse.

Tired of lyin’ in the sunshine, stayin’ home to watch the rain
You are young an’ life is long an’ there is time to kill today
An’ then, one day, you find, ten years have got behind you
No one told you when to run, you missed the startin’ gun

Even as a teenager, “one day, you find, ten years have got behind you” got to me, even when I couldn’t imagine what that actually meant. Of course 45 years later, I imagine it every single day, especially now that the band we started 30 years ago is now playing together again over a quarter-century after we broke up. Back then, we had all the time in the world, but now we’re acutely aware of how little we might actually have, even as the weight of the years temporarily melts away a song at a time.

Luckily, before I can dwell on it too much, David Gilmour, whose guitar had previously been concerned with creating tons of space for Mason & Waters to drive the song, steps forward and suspends time itself with a ferocious guitar solo that rockets and pinwheels and circles back upon itself to the point that you almost forget that there are any other instruments, until the backing vocalists reach up and slowly cajole it back to earth, where Gilmour has some more bad news:

And you run, and you run to catch up with the sun, but it’s sinking
Racing around to come up behind you again
The sun is the same in a relative way, but you’re older
Shorter of breath, and one day closer to death

It’s a gloomy fucking song, to say the least, but getting older is a gloomy business, though given where Roger Waters was going as a lyricist for the rest of the decade as he slowly took over Pink Floyd, “Time” is a romp in the fields, despite the final Wright-sung second half of the second verse.

Every year is gettin’ shorter, never seem to find the time
Plans that either come to naught or half a page of scribbled lines
Hangin’ on in quiet desperation is the English way
The time is gone, the song is over, thought I’d somethin’ more to say