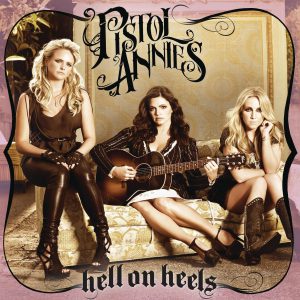 And nowhere do you hear the collaboration than on their vocal arrangements, which often alternate the individual singers with harmonies that simultaneously as old as the hills and as fresh as the wind. A perfect example is the highlight of their 2011 debut, Hell on Heels, the delightful on-the-road ditty “Takin’ Pills.

That final verse comes after three other verses that go into great detail on each of their vices, accompanied by a shitload of stinging lead guitar throughout the song, and always heading back to the chorus, all three women having the utter time of their lives.

Yeah we owe 400 dollars to the boys in the band
Gas lights blinking on our broke down van
We’re living on truck stop burgers and fries
Crossing our fingers for a vacancy sign
Now who in the hell is gonna pay these bills
When one’s drinkin’, one’s smokin’, one’s takin’ pills

And while “Takin’ Pills” is neither the first nor the last self-mythologizing life on the road song written or co-written by someone who has more money than they know what to do with, it is absolutely one of the most charming.