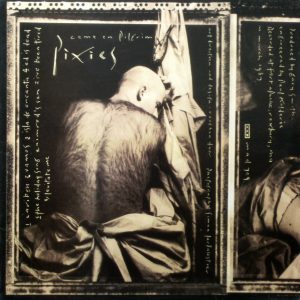 And while they clearly had a lifetime pass by the time they broke up — some might say they got that pass with their second full-length — they certainly used it and used it and used with the endless reunion tours; not even bothering to release an album of new until twice as many years had passed post-reunion than had passed in their original incarnation. And it didn’t help that their reunion albums were, um, not good, especially when peers like Dinosaur Jr and Superchunk were issuing post-reunion albums that walked with their best work.

Of course, all of this was in the future when they released their debut EP (marketed as a “Mini-Album” but c’mon pilgrim, it’s an EP), Come on Pilgrim, near the end of 1987. Of course, that was in the U.K. only, as none of these songs would be heard in the U.S. until they were tacked onto the CD of Surfer Rosa a few months later.

By that time, of course, Pixies were definitely the next big thing in my little underground, which I’ll admit, perplexed the holy living fuck out of me.

Here is my confession about the Pixies: I didn’t get them until Bossanova. I’d see hipsters walking around the Fresno State campus with their “Death To The Pixies” T-Shirts and think: what even the fuck, dude? It was the first time I felt old and out of touch. At the ripe old age of 25.

So I didn’t get my first Pixies album until January of 1991, but once Bossanova got its hooks into me, I spent the rest of that year playing catch-up, buying the Surfer Rosa / Come on Pilgrim CD in December, just in time to see them in San Francisco on their final tour. By that time, of course, I was a full-blown fan, and had a grand old time.

So while my grokking of Come on Pilgrim was somewhat muted by it being after the superior Surfer Rosa, there was no doubt that the Pixies hit the universe with their style well determined: weird, noisy songs with the instruments popping in and out of the mix, creating a dynamism that had the upshot of making the arrangements seem trickier than they really were, over which Black Francis screamed his weird-ass lyrics while Kim Deal (disguised as Mrs. John Murphy) added her sweet-and-sour backing vocals.

So for example, “The Holiday Song” roared out of the gate with Francis singing about a guy who was, well, jerking off to his sister.

But, of course, you might not even really notice that’s what it was about, because Joey Santiago’s guitar leads were so interesting, alternating between stinging and sighing, and drummer David Lovering continually changing up the beat — straight up at the beginning of the verses, double-time on the choruses, and rolls and stop-times at randmomly exciting intervals — so even when Francis goes ever more psychotic as the song continues, it all seems more like a holiday in Waikiki than a holiday in the sun.