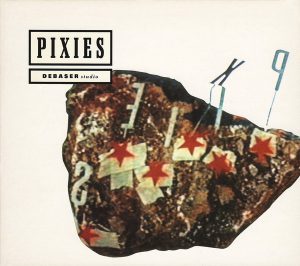 Doolittle is, of course, the Consensus Greatest Pixies Album Ever Full Stop Don’t Even Bother Naming Another Of Their Albums Because You’ll Only Embarrass Yourself, and I’ve often wondered if it got to be the CGPAEFSDEBNAOTABYOEY because of the utterly dynamite first side, which starts off with a movie and ends up in heaven. As I’ve already mentioned, I slept on Doolittle for two years, because I’m an idiot, but when I finally got around to it during the summer of 1991 — thank you Ragin’ Records — I was absolutely floored by how it opened.

First, there’s a surf bassline by Kim Deal, echoed by Joey Santiago’s lead guitar, then with David Lovering going utterly nuts on his snare drum, Black Francis dials his voice up to, like, 86, and immediately starts ranting.

And it’s at about this point that you realize he’s having more fun than you’d think would be possible for a song with “slicing up eyeballs” as the third line, and so he continues, growing ever more joyfully psychotic with every line.

And then with Deal and Lovering doing a quick build and Santiago dropping out, he continues:

Wanna grow up to be, be a debaser! (debaser)

And at this point, they do an incredibly smart thing, as Santiago brings the noise back in and Lovering rolls around his kit: they bring in Kim Deal — in her sweetest voice possible — to sing counterpoint.

That’s pretty much it for “Debaser,” except they wanna do it all again, just slightly differently. So Lovering and Deal drop out completely from the verse and Francis replaces the “I want you to know” with even the more debased-sounding “AH HA HA HO” and at the end, there’s a long squealing guitar solo from Santiago, who doesn’t quite get as insane as the vocals, but most certainly tries his best.

An adrenaline rush in song form, “Debaser” is absolutely peak Pixies, always sounding like it’s going to fall apart at any second, until you realize that every single note, every single moment, is totally and utterly precision-tooled.

I know that I’m only a few days removed from writing about Pink Floyd, and in fact, the day I write this is the day I’m posting about “Sheep,” but I feel like the Pixies were, at heart, an art-rock band. Just an art-rock band filtered through the lens of punk rock, who — like Pink Floyd — knew exactly what their strengths were, and when they found the best ways to exploit those strengths, were capable of utterly glorious music that sounded like nobody before them, but sure as fuck influenced what came after.