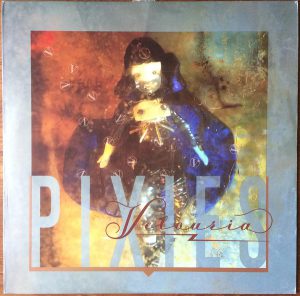 Not only that, one of my top 10 favorite albums of the 1990s; the record that finally trampled all over whatever objections I may have had to the Pixies and turned me from a skeptic into a fan. I know that some of you die-hards are even now shaking your heads about this.

That said, it was also the first Pixies album I ever bought: as I mentioned before, neither Come On Pilgrim nor Surfer Rosa, and I quit KFSR at the exact moment Doolittle came out, or it might have converted me just by playing songs like “Debaser” or “Monkey Gone to Heaven” on the radio. Had I even bothered to done so. And honestly, I’m not even sure why I tried Bossanova: most of the reviews — outside of Robert Christgau in the Village Voice — pretty much trashed it, which seems . . . insane now.

In any event, my purchase of Bossanova was part of a Columbia House introductory offer, me taking a chance on the Pixies for cheap, and falling in love with it listening to the CD over and over in my — I mean, the — office at Video Zone.

Unlike Doolittle, which was incredibly front-loaded, Bossanova started off incredibly weirdly, with a surf instrumental followed by a noise instrumental with vocal sounds, so the first proper song didn’t even happen until track three. Luckily, that song was “Velouria,” which I loved so much and it dragged me into the rest of the album, which had a second half that was even stronger that Doolittle’s first half.

Opening up with a grand riff, “Velouria” gets to its point almost immediately thanks to a searing lead from Joey Santiago and the addition of a fucking theremin, which added just enough of a weird spooky vibe to the proceedings that you might not even notice just how catchy the chorus was. Until, of course, you did.

As it progresses, “Velouria” just gets bigger and bigger, and you start noticing not just Kim Deals backing vocal, but her bass runs; the random bursts of guitar and and maybe not so much the lyrics, which apparently trace the titular character’s background to the sister continent of Atlantis, Lemuria, — google it, I dare ya — as well as where she’s living right now, Mount Shasta. Because it’s a mystical place for a mystical girl.

Or not, especially since Black had originally called the song “Victoria,” but didn’t want any konfusion with the Kinks klassic, and changed it to the much more suitably mysterious “Velouria,” which, as a final masterstroke, they had Kim Deal spell out (“V-E-L-O-U-R-I-A”) during the song’s coda, though she kinda smushed some of the letters together and was so buried under all of the guitars and theremin that you could listen to it dozens of time without picking up on it.