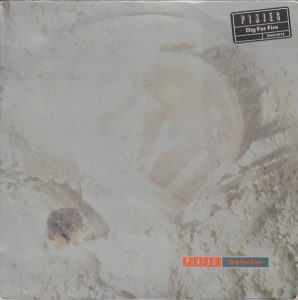 None of this makes any sense: the Pixies have been able to be a beloved touring act for the past 15 years, but nobody buys their albums; which I guess is pretty much the way the music biz works in the age of downloading and streaming, come to think of it.

Meanwhile, “Dig For Fire” turns out to be my favorite song on my favorite Pixies album, yet another weird and unique combination of sounds and lyrical imagery.

It starts with random percussion, bass and guitars winding around each other, when suddenly drummer David Lovering comes on with what seems like the wrong beat, his kick drum feeling off-kilter until Black Francis rescues him with some chickenscratch guitar. In a weird way, the verses of “Dig For Fire” are as funky as the Pixies ever got — but more like Led Zeppelin funk than James Brown funky.

But that all goes away with the chorus, where the both guitars and Kim Deal get cranked.

But it’s the second verse and chorus of “Dig For Fire” that I truly love; weird, surreal but catchy as all get-out.

There is this old man
Who spent so much of his life sleeping
That he is able to keep awake for the rest of his years
He resides on a beach in a town
Where I am going to live
And I often ask him
“Are you looking for the mother lode?”
Huh?
No
No, my child, this is not my desire
And then he said

But this time, when the chorus kicks in, there aren’t any vocals at all. Instead, Joey Santiago plays the melody of the chorus on his guitar; a thing I love, of course, but even though I’ve heard it a zillion times, it catches me by surprise each and every time, and just when I assume that it’s a wordless chorus all the way down, Francis and Deal come back in and sing it one last time, taking the song home, having found the fire they were digging for.