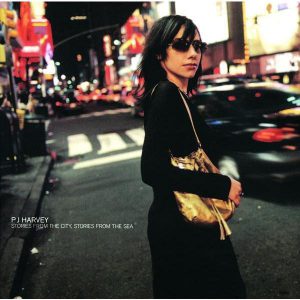 But holy jesus fuck, what an amazing album opener! “Big Exit” opens with a apocalyptic guitar riff, echoed by a keyboard, propelled by double-time drums and Polly Jean Harvey’s voice city-sized as she joyously yelps the opening verse.

And then she somehow gets even bigger as she powers into the chorus, as a bass pops in, the keyboards back off and the guitars jingle and jangle all around.

Baby, baby
Ain’t it true
I’m immortal
When I’m with you
But I want a pistol
In my hand
And I want to go to
A different land

With her voice holding out long notes — especially on the “I’m immortal” — while retaining grit and energy, every time she launches into that chorus, it’s the musical manifestation of the end of the world she sings about during the break, and then on the last one she hold out “laaaaaaannnn-hhhaaaaaannddd-annnnnnd” and it’s totally and completely transcendent.

That “Big Exit” — great title for an opening track — set the bar pretty fucking high for the rest of Stories From The City, Stories From the Sea, and while none of rest of the songs never get quite that high, they get pretty fucking close, over and over again.