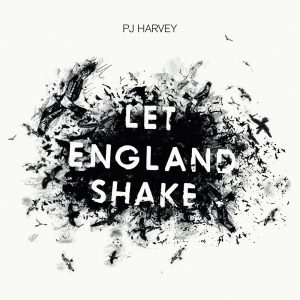 And in fact, on “Written on the Forehead,” she comes up with an apocalypse song that is incredibly lovely while also unflinching in its look at the effect of war on people’s lives:

And then, over mournful keyboards and a slow beat, she deploys a devastating sample from Niney The Observer’s seminal reggae jam, “Blood and Fire.”

The contrast between Harvey’s etherial vocals and the necessarily lo-fi sample is amazing: she’s having conversations with refugees whose live are altered forever as Niney is acting as a greek chorus, and as the song progresses is gets both more beautiful, more scarey and more intense.

“Written on the Forehead”