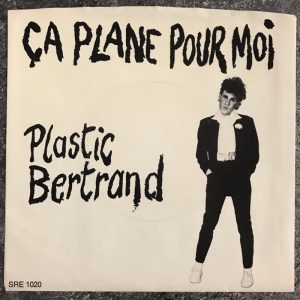 (BTW, this isn’t the longest I’d ever gone without knowing what a song was or who performed it: at some point in the mid-1980s, we taped something off of Nite Flite that we always referred to as “The Japanese Sex Pistols” and I still don’t know what that is. I think I even ran an digital rip of it against Shazam a few years ago and Shazam was stumped.)

Anyways, thanks to KFSR, I think, I not only got to hear “Ca Plane Por Moi” again, and though the song got slagged for being a parody — and hell, even had a fucking saxophone (French punk parodies are alright if you like saxophones) — I’ve always thought it was catchy as fuck, and you’re welcome for me sticking it in your brain for the rest of the day.

However, that catchiness is pretty much the only straightforward thing about “Ca Plan Por Moi,” as the rest of it is total and complete artifice. In the grand tradition of, uh Fabian and Milli Vanilli, Plastic Bertrand himself didn’t even perform on the track: instead it was producer Lou Deprijck who sang the nonsense Franglish lyrics.

It gets even weirder: there was another song with the exact same backing track — according to wikipedia, played by the famous trio of Mike Butcher on guitar, John Valcke on and Bob Dartsch on drums (as always, the saxist gets the shaft) — called “Jet Boy, Jet Girl” as performed by, ahem, Elton Motello, and later by the Damned, because sure, why not. Unlike “Ca Plane Poi Moi,” “Jet Boy, Jet Girl” had truly filthy — and kinda ahead of their time for a punk rock song — lyrics.

We made it on a ballroom blitz
I took his arm and kissed his lips
He looked at me with such a smile, my face turned red
We booked a room into the Ritz
Ooh, he gives me head

But “Ca Plane Por Moi” didn’t: it was a massive smash around the world, except in North America, where I guess it was still “too punk” or something, though like I said, I did hear it on the radio at least once.

And now, all these years later, I find everything about “Ca Plane Por Moi” to be awesome, from the incredibly weird to the fact that the combo of punk guitar, surf music hooks and sax was a precursor to my beloved Psychedelic Furs (coming soon!) and my even more beloved The Jesus and Mary Chain.