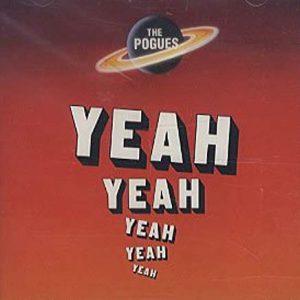 One one hand, while “Yeah Yeah Yeah Yeah Yeah” continued the partying vibe of If I Should Fall From Grace With God, it also featured an instrument practically absent from nearly all of their previous recordings: an electric guitar.

And in fact, the electric guitar is the first thing you hear, accompanied by drummer Andrew Ranken’s straight-forward double-time bashing, and as such “Yeah Yeah Yeah Yeah Yeah” is probably the most traditional rock ‘n’ roll song this band of miscreants ever did, right down to the thirsty lyrics.

Oh and in case you needed more specifics, you could check the long version, which is dominated by a long long dub part in the second half of the song where producer Steve Lillywhite loops MacGowan singing “I love you baby / I love your breasts” approximately 7,566,941 times probably because they thought it was ridiculous and funny.

The verses are followed by a grand call-and-response chorus, which says all that needs to be said.

And then they somehow top that with a sax solo that killed me in 1988 because it reminded me of that ripping solo Duncan Kilburn did during “We Love You” by the Psychedelic Furs, which was probably a coincidence, but it pretty much solidified “Yeah Yeah Yeah Yeah Yeah” for me, and I’m sure I played the two songs back-to-back at some point.

After that “Yeah Yeah Yeah Yeah Yeah” builds into a grand crescendo, before the fade, though, as I mentioned, there was a longer version on 12″ if you needed it.

Despite seemingly being a readymade single, “Yeah Yeah Yeah Yeah Yeah” stiffed in the U.K., I guess for being off-brand, but here in the U.S. it was the first Pogues song to make any charts at all, making it all the way to #17 on the rock charts and #36 on the club charts. Since it wasn’t on any of their studio albums, and has only intermittently shown up on their best-ofs, I’m curious as to how many Pogues fans plain forgot this song even existed.