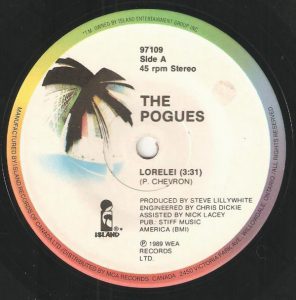 As you’ve probably figured out, most of my favorite late-period Pogues songs are the ones where they broke formula and tried something different from the expected Irish Folk-Punk that they made their original mark with, and “Lorelei” might be the biggest break of all, while still having roots in things they’d previously done.

On top of all of that, “Lorelei” added a couple of other elements: it was based around a Phil Spector beat, and Shane MacGowan was nowhere to be found. Instead Chevron & MacColl sang the words in unison.

You told me tales of love and glory
Same old sad songs, same old story
The sirens sing no lullaby
And no-one knows but Lorelei
By castles out of fairytales
Timbers shivered where once there sailed
The lovesick men who caught her eye
And no-one knew but Lorelei

And yeah, probably the only reason “Lorelei” made Peace and Love was that MacGowan was finally beginning to succumb to the massive quantities of drink and drug he was consuming, it wasn’t like he was ever all that prolific in the first place: its just on Peace and Love, the other band members filled in the gaps rather than traditional Irish songs, and those songs were moving further away from their roots.

Back in 1989, this really didn’t bother me, and in fact, the diversity of the songs on Peace and Love was probably why I loved it so much (and still love it more than any of their albums but If I Should Fall From Grace With God): I never quite knew what I was going to get from moment to moment.

And so “Lorelei” gained momentum as it went on, even fitting guitar leads — though not a solo, because c’mon! — battling a harmonica solo at the end.