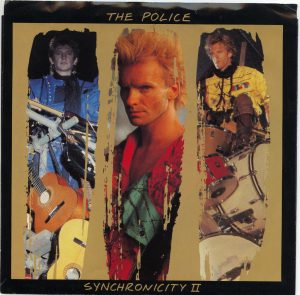 So, as probably wouldn’t surprise many of you, I’ve been thinking a lot recently about what it means to be in a band again. Or be in a band at all. Back in the day, I used to joke that being in the band — at least a local band — meant you had all of the responsibilities of both a job and a relationship, only you didn’t didn’t get paid and you didn’t get laid.

And given that I’m writing this just a couple of days before my band’s first gig since January 18, 1992 (not that I’ve been keeping track) — though it won’t post until afterwards — and in the intervening time, I think I’d forgotten all of the logistics, compromises and work involved. All of which is worth it when everything clicks, of course, and you’re making a sound that nobody has ever quite made before and everybody is contributing equally to that sound.

Which was how it was on the first three, maybe four Police albums — you could hear Sting, Andy Summers and Stewart Copeland having a musical conversation on each and every song. Not so on Synchronicity — and as a matter of fact, they weren’t even in the same room when they were recording the backing tracks, and while they’re all such good musicians, it didn’t really detract from the final songs, it did add a distance that wasn’t there before: none of the songs had the casual camaraderie that fueled, say “Reggatta de Blanc.”

So the songs I really liked on Synchronicity I liked for different reasons than I liked previous Police songs: in addition to the perennial “Every Breath You Take,” I emjoyed the exotic percussion on “Walking in Your Footsteps,” the keyboard textures of “Synchronicity I” and the hard rock guitar of “Synchronicity II.” .

Opening with Andy Summers playing a repeating riff over massive pounding drum, really the only identifying factor of “Synchronicity II” are Sting’s vocals, otherwise it coulda been mistaken for a U2 song. Which is fine, I like U2. And besides, 1983 Bono wasn’t going to draw parallels between the humdrum daily existence of suburban life with the appearance of, fuck it, let’s say the Loch Ness Monster.

In any event, Andy Summers was really the star here, though, especially live, where he would torture the fuck out of his guitar during the instrumental break, as he provided counterpoint throughout, while soared along with Sting at the end as Sting chanted “many miles awayyyyyyyyy” over and over and over. Which, honestly, was my favorite part of the song.

Like “Every Breath You Take,” I considered “Synchronicity II” to be a great song that happened to be by The Police as opposed to a great Police song. And while maybe that distinction was somewhat meaningful in the mid-1980s, my guess is that it makes no sense to anybody who wasn’t there at the time, just how alien this music sounded. Had they continued, Synchronicity would have just been a transition album as opposed to a final statement, and I’d totally view it differently, I’m sure. But they didn’t: the social and musical pressures that went along with their massive success proved to be too much, and so they broke up.

Which didn’t bother me: Sting went on to a highly successful solo career that left me totally cold, and the two other guys have basically lived upon their legends, secure in the fact that they made some great music in their heyday.