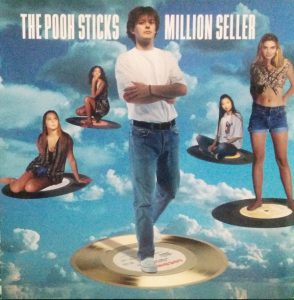 An ode to being the lucky guy who is enjoying the love of the girl everybody else wants to be with, “Baby Wanna Go Round With Me” starts with some crunchy guitar chords before settling into a organ & guitar filled groove over which a massively overdubbed Hue Pooh (Yup!) sings about just how lucky — and how insecure — he is.

And when the other boys start playing up
Hoping to make her see
Well, I’ll admit it makes me feel good
Baby wanna go round with me

Baby wanna go round with me

That last part, is of course, augmented with a stop-time, and followed up by a guitar solo that plays the melody line: two of my absolutely favorite tricks in the book, both rendered totally and utterly effectively. The only thing this song is missing is a modulation. Oh, and handclaps.

But that’s OK, because even without those “Baby Wanna Go Round With Me” is 2:32 of sheer pop perfection. That sadly, is kinda lost.

“Baby Wanna Go Round With Me”