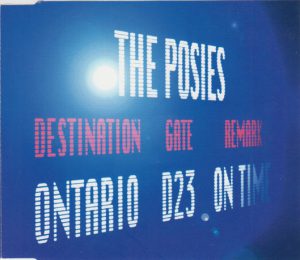 The second time I saw the Posies they weren’t really the Posies, they were Big Star.

Or half of Big Star, anyways.

Instead of immediately jumping back into the studio to leverage the momentum they’d acquired from the (relative) success of Frosting on the Beater, Ken Stringfellow and Jon Auer instead filled in for the Chris Bell and Andy Hummel for a series of shows where Alex Chilton and Jody Stephens finally kinda sorta cashed in on a legacy that had been growing for a decade.

The show I saw was at the Fillmore in San Francisco on June 15, 1994, and it was just fine, though — as expected — Alex Chilton still didn’t really understand what the fuss was all about, even as one of the biggest rock bands on the planet at the time, The Counting Crows, opened the show under a pseudonym.

In any event, it would be two more years before The Posies were able to get their third DGC album out, and of course, by 1996, everything that contributed to the success of Frosting on the Beater was long long gone. Not only that, by all accounts, The Posies kind of knew that, as Amazing Disgrace was full of bitter angry songs that reflected the tensions with the record company, the tensions that led to a brand new rhythm section, and the tensions that were fucking with their personal lives.

The result was an album that started with a song called “Daily Mutilation” and featured titles like “Hate Song” and “Everybody is a Fucking Liar” and turned out to be my favorite Posies album of all, for which the lead single was a two-a-half minute jam that included a Neil Young dis in the opening verse.

It’s almost like Ken Stringfellow had heard “Helpless” one too many times, and decided to write kind of an answer song. Or maybe he wrote “Ontario” for the reasons delineated in the final verse.

When I told you what I wanted to know
You said “Take me to Ontario”
When I asked you, “Why Ontario?”
You said, “It sounds good on the radio” — go!

In any event, “Ontario” alternates between speedy melodic verses and noisy double-time choruses where it’s just Stringfellow and Auer singing “ahhhhhhhhh” over an edifices of fuzzy guitars, occasionally screaming “I wanna go, I wanna go / To Ontario!”. And while “Ontario” would have sounded great on the radio, it was just too late and it didn’t go anywhere except my mix tapes.