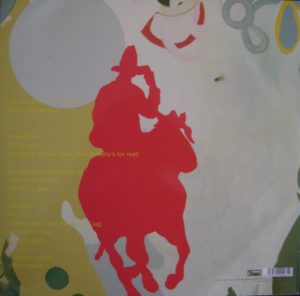 And somehow, my favorite song on the Preston School of Industry’s — the post-Pavement band formed by Scott “Spiral Stairs” Kanneberg — All This Sounds Gas album is wrapped up in both.

In spite of — or perhaps because of — all of the weirdness of the post-9/11 mood in the United States, I managed to secure a job after nearly six months of not having one, still a personal record which I never ever hope to break. But the thing was that the job was at IndyMac Bank in Pasadena, and Rox and I lived in Oakland.

And so we decided to pack up and move to L.A., a thing that many of our friends who lived down here had been suggesting for years, so we were luckily heading directly into a support group who came through in myriad ways. But still there was the transition: the job at IndyMac started in early October, and we had no place to live.

So the decision was made that I would decamp to an Extended Stay America in Arcadia and live there for a few weeks whilst Rox took care of our affairs in Oakland, and we’d spend the weekends looking for a place to rent. Dear reader, it sucked. But it was probably where I fell in love with three albums, which I played during the evenings there, often on repeat as I was trying to sleep: The Velvet Underground’s Bootleg Series, Vol 1: The Quine Tapes; Sparklejet’s Bar Guest — both of which I’ll get to when I get there (and probably tell the exact same story) — and All This Sounds Gas.

A gorgeous slow one (of course!), “Monkey Heart and the Horses’ Leg” features shimmering arpeggiated guitars wrapped around a swirling violin, and lyrics that I could never make heads or tails of. Or at least not until the end when Spiral Stairs rouses himself to sing the following.

It was sad and lovely, and of course echoed the words two of my all-time favorite songs, “(I Can’t Get No) Satisfaction” and “Unsatisfied.” But sitting by myself in a hotel room after going to a job that I realized almost instantly that I was going to hate, it took on extra weight, extra resonance, extra heaviness. After all, there was every chance that the job, the move, everything was going to be a complete disaster, and given the state of the world at the time, I couldn’t even imagine what might happen if we failed to make it here.

SPOILER ALERT: it all worked out. But that doesn’t make this song any less resonant for me.

“Monkey Heart and the Horses’ Leg”