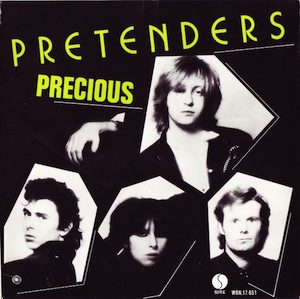 How do you talk about a thing that changed your life? Because, surely, that’s what side one of Pretenders did for me.

Here’s the thing: I came of musical age in the mid-1970s, one of the most sexist and racist moments in rock music history. At the time, it was received wisdom that only white dudes with guitars knew how to make quality rock and roll. There were, of course, exceptions to that cant — most notably Jimi Hendrix and Janis Joplin, both of whom died too young to have the world turn on them — but by and large, that’s just how it was.

Then Chrissie Hynde came along, and in the space of a single album side showed me that everything I knew was wrong. Sure, she was surrounded by three dudes, but there was no doubt from the moment her voice came at the top of “Precious” who was in charge.

I like the way you cross the street ’cause you’re precious
Moving through the Cleveland heat, how precious
You’re taking nights and all the kicks, you’re so precious
But you know I was shittin’ bricks ’cause I’m precious

Roaring out of the gate at punk rock speed, the guitars of Hynde and the James Honeyman-Scott ripping against each other over Pete Farndon’s rumbling bass and Martin Chambers’ just-slightly-weird beat, “Precious” mixed Hynde’s voice way way up front, so you could hear every single word she was singing.

And she was singing about fucking.

I was feeling kind of ethereal ’cause I’m precious
I had my eye on your imperial, you’re so precious
Now Howard the Duck and Mister Stress both stayed precious
Trapped in a world that they never made
But not me, baby, I’m too precious, I had to fuck off

Nobody, and I mean nobody heard that last line as “Not me, baby, I’m too precious, fuck off!!!!” Which is kinda hilarious, because Chrissie fucking off to London and escaping Cleveland when neither Howard the Duck or Mr Stress (a local performer) could was kinda the point of the song. Like, even though I can find exciting things in Cleveland, I’m going to London (and form myself a crack band.)

But back in 1980, hearing it as “FUCK OFF!” was far more thrilling. As were all of the guitars: Hynde’s slightly off rhythm and Honeyman-Scott’s ever-changing assortment of comments, riffs, and solos that ended almost before they started. It all added up to a statement of purpose that thrilled me every single time I put Pretenders on. And the album was just beginning.