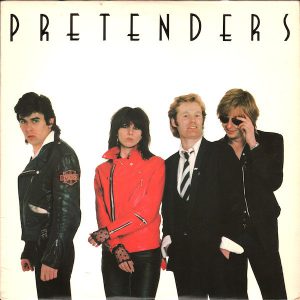 The second track of Pretenders was “The Phone Call,” which wed a pair of insistent guitar riffs, a weird drum pattern and processed vocals to create a wholly off-kilter experience, which, after “Precious,” felt like a bit of a left turn, but also set up a theme for the whole album: each track was going to be different than the previous one.

And so when the repeating riff for the pure-pop “Up The Neck” started, it was again initially disorienting, but thematically on point, especially lyrically, as Chrissie Hynde describes a sexual encounter going sideways.

Lust turns to anger
A kiss to a slug
Something was sticky
On your shag rug, look at the tile
I remember the way he groaned
And moved with an animal skill
I rubbed my face in the sweat that ran down his chest
It was all, very, run of the mill

There’s very little going on musically during the verses, as the repeating riff is gone, just drummer Martin Chambers keeping a straight beat; bassist Pete Fardon playing a simple and melodic patter and James Honeyman-Scott tossing some random chimes, so Hynde is right there in your face, her deep dark and utterly gorgeous voice on top of every single word. So when on the second verse, she tosses out the sardonic “It was all, very . . . run of the mill” you could practically hear the guy’s dick shriveling.

But you don’t really have time to think about it, as the drums get all rumbly and Hynde continues

I noticed his scent started to change somehow

And the main guitar hook sneaks back in while she continues

His face went berserk, veins bulged on his . . .

And there is a glorious, wonderous pause in her singing — already set up in the first verse, but not really noticed until now — where for all the world you’re sure she’s gonna sing a word that was pretty forbidden in 1979, she knowingly finishes:

And while radio programmers everywhere breathe a sigh of relief — I remember that “Up The Neck” got a bunch of airplay on KKDJ, even though it was somehow never a single — she finishes up the chorus with a breathy “I said, baby / Aw, sweetheart” but you’re not even sure she meant it.

James Honeyman-Scott totally meant it, though, with his guitar solo halfway through the song, an incredibly simple series of repeating notes that crawled up a mountain made of heavenly backing vocal “ahhhhhhhhhhhs” and was both totally gorgeous and completely unexpected, and while it was gone almost before it started, it stuck deep in my head.

How much do I love “Up The Neck?” I keep forgetting to mention the handclaps they stick in at random places throughout. It’s a complete and total triumph of a pop song, or at least the kind of pop song I like. And it was probably my third favorite song on the whole record.