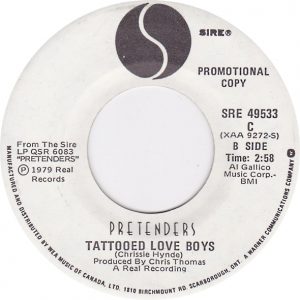 A Story Which Is True Until It Isn’t.

It’s November, 1987 and both James Honeyman-Scott and Pete Farndon have been dead for a half-decade, as Chrissie Hynde and Martin Chambers have carried on under the Pretenders banner, making one record that was pretty great and one that wasn’t.

Anyways, none of that mattered to a largish swath of our little tribe as we watched the Pretenders open for U2 — the climax of my 25th birthday weekend — at the massive Alameda County Coliseum, long-time home of the Oakland Athletics and off and on home of Oakland Raiders, because Chrissie Hynde had recruited a lead guitarist who was at least the equal and probably the better of Scott, one Johnny Marr, still fresh from the breakup of the mighty Smiths.

And while Marr felt like a different kind of guitarist than Scott; we were dead curious to see if he fit in with the Pretenders. Which he totally did, because he’s Johnny Marr. Or at least that’s what I remember, but I am an unreliable narrator about a show that took place after a whole afternoon of sharing two-liter bottles of Coca-Cola that were definitely spiked with rum and possibly spiked with shrooms.

In any event, I remember Manny — whose guitar style definitely came from the altar of both Honeyman-Scott and Marr — being very excited that Marr nailed Honeyman-Scott’s guitar solo on “Tattooed Love Boys.” However, that’s the part that’s not true. Because when I fact-checked with Manny the other day, he said that yeah “Tattooed Love Boys” was cool, but he was really more impressed with what Marr did with on the solo for “Kid.” (And he also mentioned that he used to warm up playing that guitar solo, and was jazzed to read an interview with Marr in the early 90s where Marr said that he warmed up with it, too.)

But I’m not writing about “Kid,” great song though it is, so let’s talk about “Tattooed Love Boys,” perhaps the weirdest song on Pretenders.

Roaring out of the gate with what is now a pretty infamous 7/4 time signature that is also kind of a Bo Diddley beat, and a queasy lyric that according to her book Reckless: My Life as A Pretender, was based on a real incident back in Cleveland, “Tattooed Love Boys” aims directly for the jugular.

A good time was guaranteed for one and all
The tattoos did target practice in the hall
While waiting for their number to get called out
I, I, I, I found out what the wait was about

I was a good time, yeah, I got pretty good
At changing tires upstairs bro
I shot my mouth off and you showed me what that hole was for

One of the other things Hynde mentions is that while she, Pete Farndon and the monster named Martin Chambers had no issues with the crazy time signature, James Honeyman-Scott was basically hanging on for dear live the entire time, which is why his contributions for most of the song is a three-note chime that doubled as a hook. And, of course, his guitar solo, which beams in from Mars for a measure at time while Chambers tries to fend it off with his drums. It’s totally disjointed, kind of a cross between Lindsay Buckingham’s solo in “Go Your Own Way” and the Paul McCartney, George Harrison, John Lennon trade-off in “The End.”

Punctuated throughout with interjections, moans and encouragements from Hynde, it’s easily the highlight of the song, and sets up the brutal last verse.

Now I see you all impressed and half undressed
You got paint stick all over the scars and lumps and bumps
Tattooed love boys have got you where I used to lay
Well ha ha and too bad, but you know what they say

Stop snivellin’
You’re gonna make some plastic surgeon a rich man
Oh, but the prestige and the glory
Another human interest story

And boom, it just ends. Given all of the craziness, “Tattooed Love Boys” shouldn’t have worked at all, instead, they stuck it on the b-side of “Kid” and even made a video for it, and its placement on the album just after “Up The Neck” is yet another tangent that works.