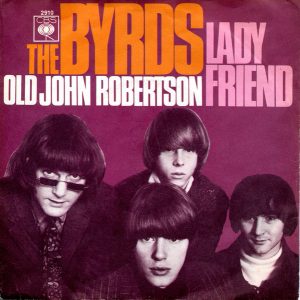 Arguably the greatest song that David Crosby has ever written on his own, the majestic “Lady Friend” is kind of the “Have You Seen Your Mother Baby, Standing in the Shadow?” of The Byrds catalog: a fantanstic non-album A-side that was sabotaged by questionable production.  Because it was considered a failure, it wasn’t released on either of their Greatest Hits albums.

I first heard it on a 1987 odds-and-sods compilation album called Never Before (an album that also featured a beautiful banner-shaped Byrds poster that hung on my wall in various apartments for years) where “Lady Friend” stuck out, but had these terrible overdubbed drums.

It wasn’t until the 1990 box set where I heard “Lady Friend” the proper way, and I immediately realized that it’s one of those songs that should be more widely known: featuring gorgeous interlocking guitars, a rollicking drum beat (that didn’t need an overdub) and an utterly anthemic chorus declaring:

And I will have to live without her and survive

After the second chorus, the whole song breaks down, and lead by the guitars a well-placed brass section, and an even better placed set of “ba ba ba ba bas,” it slowly picks itself back off of the floor for one more verse and chorus until those interlocking guitars and brass section lead the way out.

It’s one of the more sophisticated arrangements they’d done, clearly influenced by what The Beatles and The Beach Boys were doing, but the sound that Gary Usher got in the studio just wasn’t up to par with what George Martin or Brian Wilson had done. And so it was a huge flop that has only over time revealed itself to be a secret success on the Rabin scale.