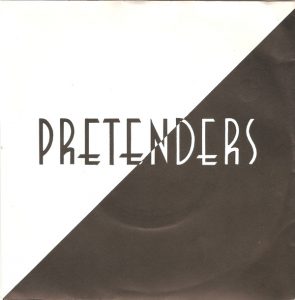 While side one of Pretenders bowled me over, up to and including the Nick Lowe-produced wall of sound take on The Kinks, I was initially more skeptical of side two, which after the pure-pop of “Kid” featured their takes on Reggae, Soul and even a proto-power ballad before finally rocking out one last time. So while I often played side two to get that last song (about which more tomorrow), when it came time to put these songs on a cassette for driving purposes, most of them got left off.

Including the massive hit single, which 1980 Jim enjoyed, but didn’t love, possibly because it was on the radio all the time. So it’s only over time that I have come to appreciate what a great song “Brass in Pocket” truly is.

For one thing, it’s all hook: from James Honeyman-Scott’s understated, echoing guitar riff to Martin Chambers fully-in-the-pocket groove, “Brass in Pocket” fully struts down the street with the same confidence that Chrissie Hynde projects in her voice and her words, where she follows “gonna gonna make you notice” with a list of exactly how she’s going to accomplish that. All together now!

Whew! It’s sexy as all fuck, ain’t it? Of course, I can’t be the only person who misheard “my sidestep” as “my saucy,” and thought that was even sexier before I found out what she was really singing. But, of course by this time, they’ve strutted straight into the chorus, which even in 1980 I knew was one for the ages.

There is so much great going on here, from Hynde’s utter conviction when she sings “no one like me” to the just slightly bumping sounds of the guys falsettos on the call-and-response, said bump adding just a skosh of a humour, while also reinforcing just how fucking special she is. And finally, when she demands your attention at the end, it’s already a fait accompli, she’s got it, no doubt.

“Brass in Pocket” was a massive massive worldwide hit, going top 10 all over the world, and hitting #1 in the U.K. Even here in the U.S., where we were still resistant to “new wave,” it made #14, the first of five top 20 singles she would have over the next 15 years, and an enduring classic.