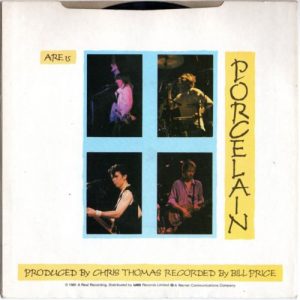 And eventually Chrissie Hynde drifts into consciousness, and she’s not necessarily in the best place.

Her voice is woozy and shaky, at best, floating in and out of audibility, and while Honeyman-Scott throws in quick, quiet solos, she continues, dazed and confused, only bits and pieces of phrases showing “cannot remember what I just said,” “cannot remember where he’s just been”, to the point where she’s just throwing out random syllables, until suddenly she snaps fully awake and barks.

My private world is coming

And after that a Martin Chambers drumroll launches the third part of “Porcelain,” a scorchingly wild James Honeyman-Scott guitar solo that eventually crashes itself and the rest of the song onto the cool, cool porcelain.

Like “Cuban Slide,” “Porcelain” was a great song that — as far as history goes — kinda ended up lost, especially after Pretenders II cannibalized Extended Play by reusing the two singles but not the b-sides. And the years wore on and Extended Play become more of a footnote — not even released on CD — it wasn’t until 2006 that either “Porcelain” or “Cuban Slide” got official digital releases, showing up as bonus tracks from the remastered rerelease of Pretenders.