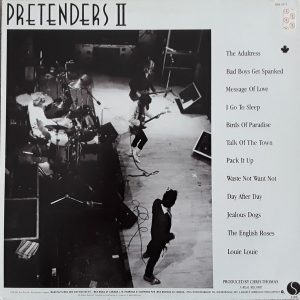 And so, James Honeyman-Scott has been at the heart of the dozen songs that I’ve written about so far, and his tremendousness is at the heart of my favorite song from Pretenders II (including the short, neutered version of “Talk of the Town” they put on it), the transcendently gorgeous “The English Roses,” as lovely of a song as the original incarnation of Pretenders ever recorded, and the last great Honeyman-Scott performance on record.

On “The English Roses” his default setting is glorious drone, his leads nearly as swoon-making sexy as as Hynde’s voice, perfectly matched by some cool Pete Farndon bass runs, Martin Chambers’ stuttering drumbeat — alternating his snare and his floor tom on the backbeat, augmented by bongos — and Hynde’s impressionistic lyrics.

So in the end, when all of the guys are singing “ooh ooh ooh ooh ooh ooh” and Honeyman-Scott is swirling around the song with his guitar, “English Roses” slurs into the fadeout in high style, as beautiful as this band ever hoped to get.

As I’ve mentioned before, I was very much disappointed by Pretenders II, and the fact that I loved loved “The English Roses” so fucking much actually accentuated that disappointment. That this song — and to a lesser extent, “Day by Day” and “Pack It Up” — could still move me the way that “Up The Neck” or “The Wait” did meant that they could do so in the future, when they got it together for Pretenders III.