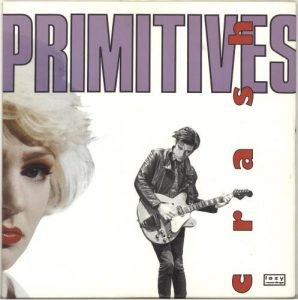 Disambiguation: This post (and the next few) is about the late 1980s indie-pop group The Primitives. If you wish to read about the band that got Lou Reed and John Cale, please see yesterday’s post.

This, ladies and gentlemens, is the platonic ideal of an indie pop song. Fusing the Cars, the Jesus and Mary Chain and The Shangri-Las, “Crash’ is two-and-a-half minutes of pure pop bliss, and a song that I’ve heard countless countless times, each and every one an absolute pleasure. I was trying to figure out just how to explain that to you — though I doubt very few who are reading this disagree — and I figured I’d do what the journos call a tick-tock on how every single second of “Crash” is pure pop pleasure.

0:00-0:10 — The Opening
“Crash” opens with a long jangly arpeggiated guitar, notes swirling over each other, played by Paul “PJ” Court, the principal songwriter for the Primitives. Because it’s both so lovely and so lonely, it instantly grabs your attention, and all you want to know is what happens next.

0:11-0:22 — The First Verse
After a couple of times around the jangly guitar is cut shot with a “wham,” and “Crash” launches into its first verse, Court switching to a modified Cars-like chunka-chunka on his guitar, supported by bassist Steve Dullaghan and drummer Tig Williams, as vocalist Tracy Tracy (yup), sings the opening voice.

Here you go, way too fast
Don’t slow down, you’re gonna crash
You should watch, watch your step
Don’t look out, gonna break your neck

Tracy’s vocals are a beguiling combination of concerned and slightly amused, just on the side of not being too-girly for this Chrissie Hynde fan.

0:23-0:34 — The Second Verse (Featuring the First Utter Genius Moment)
Just as Tracy starts into the second verse, PJ Court comes in with some crunchy rhythm guitar over the moving chunka, playing slightly ahead of the beat, and gentle reader, it is fucking everything, adding forward momentum to the second verse and also signaling that “Crash” was going to continually switch it up while adding a shitton of hooks at every possible moment.

So shut, shut your mouth
Cause I’m not listening anyhow
I’ve had enough, enough of you
Enough to last a lifetime through

0:35-0:45 — The Third Verse
Court switches it up, dropping the crunchy guitar for a yet another jangling arpeggio as Tracy gets even meaner.

So what do you want of me
Got no words of sympathy
And if I go around with you
You know that I get messed up, too
With you

0:46-0:50 — First Pre-Chorus with Handclaps! (The Second Utter Genius Moment)
Handclaps make a good song better and a great song immortal. And the handclaps leading into the chorus of “Crash” are as perfect as they are inevitable.

0:51-1:00 — The First Chorus
Paul Court (at least) joins in for the chorus, which is one of the all-time greats, both melodically and lyrically, and goes a little something like this:

1:01-1:12 — The Fourth Verse
After the first chorus, there’s another wham! And they launch in on the fourth verse, which is close to, but not quite the same as the first verse.

Here you go, way too fast
Don’t slow down, you’re gonna crash
You don’t know what’s been going down
You’ve been running all over town

Just as you think that they’re gonna barrel into the fifth verse, guns a-blazin’, they pull out yet another trick, just as Tracy sings “So shut!” they hit a totally and unexpected stop time, shutting the song down like the titular crash, her voice echoing “uuuuut” over the chasm just for a second — or is it a whole lifetime? — before they rev it back up again, Court bringing back the rhythm guitar from second verse and all of the jangle he can muster.

Shut your mouth
Cause I’m not listening anyhow
I’ve had enough, enough of you
Enough to last a lifetime through

So what do you want of me
Got no cure for misery
And if I go around with you
You know that I get messed up, too
With you


1:36-1:47 Second Pre-Chorus with Handclaps and Vocals (Featuring the Fourth Genius Moment)
And then, and then, instead of just doing the handclaps going into the chorus, Tracy Tracy adds a couple more rounds of “with youuuuuuuu” alternating with the handclaps, just stretching the tension to the breaking point before one last glorious chorus.

1:48-2:32 One Last Glorious Chorus (Featuring the Final Genius Moment)
Had they just gone back to the “na na na na na na na” chorus, dayenu, but somehow in its final minute, “Crash” manages to top itself, by the simple — and honestly, it’s all been simple, which is part of the genius — addition of actual words as counterpoint.

With Court again piling all of the guitars — chunky, jangly, crunchy — in perfect formation, as the boys chant “slow down” while Tracy warns “you’re gonna crash” over and over and over and over, it’s brutal, it’s brilliant, it’s cathartic, it’s the fucking world in a song.

Or at least, it was my fucking world in a song. The summer of 1988 was one of the more brutal summers of my life up to that point, a never-ending cacophony of drinking, drugging and drumming during which I also somehow balanced a full-time day job — managing the Video Zone — for the first time . . . ever, really. And that didn’t even count my weekly airshift at KFSR, at which point I was pretty much starting my weekend early drinking a half-pint of something or other while I was playing songs like “Crash” or “Ocean Blue.”

I mean, I was 25 and indestructible, of course, but even I recognized that I was living at a pace that even I couldn’t keep up with, so the utterly irresistible last glorious chorus of “Crash” rang in my ears even as I tried to ignore its warning. Somehow, I survived it, at least largely because someone else’s crash — literal, not figurative — kinda slowed everybody down for awhile, as it turned out that we were destructible after all.

In any event, I wasn’t the only person for whom “Crash” resonated: it was a massive college radio and modern rock radio hit, as well as going all the way to #5 in the U.K., as it well fucking should have. Oh — and I’d forgotten all about this, for good reason — apparently, in 1995 , some fucking asshole got the idea to remix “Crash” and add a whole bunch of extraneous shit onto for the motion picture soundtrack of Dumb and Dumber, and sadly, that shitty shitty version has probably reached more people than the original. So fuck forever whoever had that idea, as you took one of the greatest recordings ever and basically shit all over it, and my deepest apologies to anyone who thinks it’s the canonical version.