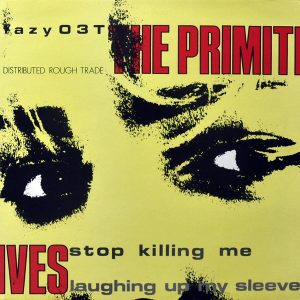 Of course, The Primitives didn’t form in a vacuum: in the mid-1980s, plenty of bands got their heads rearranged by Psychocandy’s mixture of horrendous noise and gummy pop, and suddenly the English countryside was crawling with bands like the Shop Assistants, Primal Scream, My Bloody Valentine, Darlings Bud, Soup Dragons and so on and so forth.

So this was the world in which The Primitives put out their ferocious third single, “Stop Killing Me,” the one that well and truly made their reputation (the story goes that Morrissey being photographed in a Primitives t-shirt helped them as well, believe it or not), and why not? “Stop Killing Me” is two minutes of glorious melodic noise.

With Paul Court starting off with a noisy buzzsaw guitar, the rhythm section of Tig Williams Steve Dullaghan playing at punk rock and Tracy Tracy jumping all over it with a joyful vocal, “Stop Killing Me” was utterly irresistible when it went into it’s chorus, especially as Court layered a jingle-jangle all over it as well as “na na da da” backing vocals

I always heard ’cause you’re killing me” as “Shop killing me” and always thought it was a weird shot at the Shop Assistants. Throughout the , Court layers and takes away on more guitars and more feedback, and there’s also a neat moment when they get around to repeating the first verse.

It might not be what’s actually going on, but I always thought that was a bit of a tribute to the bridge The Jesus and Mary Chain’s titanic “My Little Underground” where Jim Reid sings about the sun shining so high above as his brother makes the sound of that shine.